Finance ministers tell their side of story

Finance ministers tell their side of story 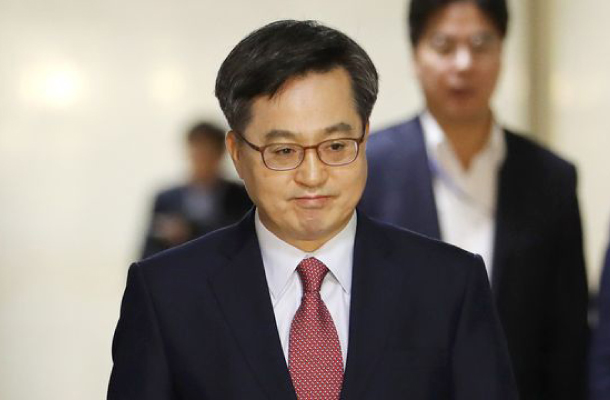 The current and former finance ministers finally broke their silence over controversial claims by a whistle-blower that the ministry issued deficit-financing bonds unnecessarily and tried to change the CEO of Korea Tobacco & Ginseng (KT&G), a private sector company.

Current Finance Minister Hong Nam-ki said Friday that the whistle-blower, former Finance Ministry employee Shin Jae-min, misunderstood what was going on because he had limited information as a low-level employee. Decisions by his predecessor Kim Dong-yeon would have considered all economic factors, he said, suggesting that political influence or pressure were not part of the picture.

“When it comes to ‘facts’ there was no outside pressure,” Hong said.

“[Former Finance Minister] Kim would have made decisions considering the various factors.”

Hong said while whistle-blower Shin, who was working in the ministry’s treasury bureau, might have had his own thoughts on the issuing of bonds, former Finance Minister Kim had to make decisions with a long-term view with managing the government’s fiscal policy for the next five years.

Hong denied claims by Shin that the government tried to manipulate the national debt-to-GDP ratio in order to make the former Park Geun-hye administration look bad.

“As a person who has worked on budget-related works [at the Finance Ministry] for more than 10 years, there wouldn’t have been any intention of trying to adjust the [debt] ratio to the advantage of a sitting administration,” Hong said.

He said every year the government plans how to manage for the next five years, and in that process, there are discussions over the debt ratio. As a result, various numbers are suggested.

“We plan to do a similar process this year,” Hong said.

“[The reason for this misunderstanding] is because the internal decision-making process within the Finance Ministry is not known overall,” Hong said. “The Blue House could make a suggestion, and that opinion could be aligned with that of the Finance Ministry’s, but it could also not align. What’s important is that these differences are discussed in meetings [with the Blue House].”

In regards to recommending Shin be prosecuted for leaking confidential government information to the public, the finance minister said it was inevitable as the public may have been misled based on incorrect information. However, he did not say whether the government plans to drop the charges against Shin, who reportedly tried to commit suicide on Thursday.

Former Finance Minister Kim, who is at the center of the controversy, posted his thoughts on Facebook late Thursday. Shin accused his former boss of making a political decision to issue the bonds, having been given a specific debt-to-GDP ratio of 39.4 percent to maintain.

The ministry issued the deficit-covering bonds to keep that ratio high, Shin claimed, to make the Park administration look incompetent.

Shin claimed that then-Blue House economic policy secretary Cha Young-hwan pressured the finance minister to withdraw a buyback plan of government bonds one day before it was set to occur, spooking the local bond market.

Former Finance Minister Kim said in his Facebook post that after ending his public service last month, he has avoided public activities and spent time alone or with his family.

He said he believed it was his role to support the current economic team of the Moon government from afar and that was one of the reason he didn’t respond to the recent controversy.

“As a person who has retired, I believe it was inappropriate to talk about every detail of policy decision-making during my time, and I didn’t think it was suitable to explain in detail as the Finance Ministry was countering [the accusations] through an overall review of documents and [testimonies] from people who were in charge at the time,” Kim wrote.

But he said the decision-making within the Finance Ministry on most policies goes through comprehensive reviews and adjustments among the various bureaus and departments.

“The recently raised issues not only involve the treasury but also the long-term national debt, macroeconomic management and drawing up of the budget for the following year and the year after that, the outlook on tax collections and fiscal policies,” Kim said. “It has to consider the opinion of not only the treasury bureau but also that of macroeconomics, taxation and budget offices.”

He said he understand the concerns that Shin had when working in the treasury bureau.

“But I hope [you] would also understand the position of people who have to look with a broader vision,” Kim said.

Kim said he believed in the sincerity of Shin and that civil servants must stick to their beliefs and work hard to realize those beliefs.

“In 34 years of public service I, too, have never bowed to unjust pressures,” Kim said.

But he added that not all policies that one believes in are followed through upon.

“Beliefs and comprehensive and rational adjustment of policies are two different things,” Kim said. “An opinion of a department doesn’t always become the official position of the overall government.”

However, in his post, Kim did not counter claims that he ordered Finance Ministry officials to keep the debt-to-GDP ratio high or Shin’s claims that the Blue House prevented the ministry from executing a 1 trillion won ($890 million) buyback of treasuries.

Kim asked Shin to think of his family and the people who would suffer if he committed suicide while sharing his personal pain of losing a son. Shin is currently being treated at the Seoul National University Bundang Hospital, although the government is keeping mum about his exact condition.

Koo Yoon-cheol, the second vice finance minister, visited the hospital on Thursday representing the ministry but failed to meet Shin or his family.