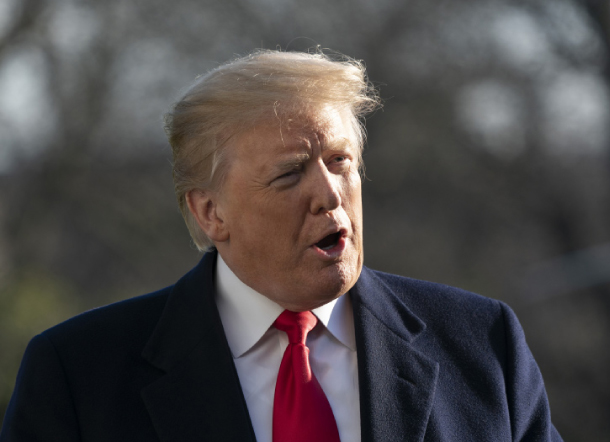 Hinting that preparations for his second summit with North Korean leader Kim Jong-un are speeding along, U.S. President Donald Trump said Sunday that the location for the meeting will be announced in the near future.

“With North Korea, we have a very good dialogue,” Trump told reporters before boarding a helicopter to head to a presidential retreat at Camp David, Maryland, adding he has “indirectly spoken to Chairman Kim.”

During a cabinet meeting last Wednesday, Trump revealed he had received a letter from Kim, but didn’t reveal details about it. The North Korean leader in his New Year’s address said he is ready to meet with Trump again “anytime,” and Trump in turn responded with enthusiasm.

“We’re negotiating a location,” said Trump Sunday on a second meeting with Kim. “It will be announced probably in the not too distant future … They do want to meet, and we want to meet and we’ll see what happens.”

While he said he was “not going any further than that,” he called their relationship “very special.”

He continued, “You’d be in a nice big fat war in Asia with North Korea if I wasn’t elected president.”

But Trump added, “But the sanctions remain in full force and effect, and they will until we have some very positive proof.” The U.S. State Department has maintained that economic sanctions won’t be lifted until North Korea’s complete denuclearization, while Kim Jong-un called for the easing of U.S. pressure in his New Year’s speech. Trump said, “We’re doing very well with North Korea and we’re also doing very well with China on trade.”

His remarks indicate that he is prioritizing speeding along a second summit with Kim, which he previously said could be held as early as this month. This is despite the ongoing U.S. government shutdown, which could hinder the preparation process.

Trump said last fall that three venues are being reviewed for a second meeting with Kim to follow up on the first North-U.S. summit, which was held on June 12 on Sentosa Island in Singapore.

The Trump administration is scouting locations for a second summit, CNN reported last Thursday, citing two sources familiar with the planning process. U.S. scouting teams reportedly were sent to multiple locations in different regions, including Asia, during the last few weeks of 2018, and that these locations were not necessarily formally shared with North Korea.

A Trump administration official told CNN that a proposal to hold the Kim-Trump meeting in Switzerland fell apart because of logistical issues.

The administration thought it would be an ideal location since Kim went to school in Switzerland in his youth. The official said that Kim was apparently sensitive to criticism he received for using a Chinese plane to travel to Singapore in June, and Switzerland is likely too far for North Korean planes.

A diplomatic source told CNN that the preference would be for the summit to take place in an Asian country, adding that North Korea wants to hold the meeting in Pyongyang.

Vietnam, Indonesia, Mongolia, Hawaii and Panmunjom at the inter-Korean border, are some potential locations for a second summit circulated by North Korea observers. Hawaii has likely been ruled out because it is too far. Kim Jong-un’s private plane, the Chammae-1, is a Soviet-era Ilyushin IL-62M jet and is believed able to safely fly up to 7,000 kilometers (4,349 miles). Hawaii’s air distance from Pyongyang exceeds this.

Vietnam, Indonesia and Mongolia are all Asian countries with North Korean embassies that are within the range of Kim’s plane.

Mongolia was ruled out as a potential venue during the first summit as well, taking into consideration the infrastructure the Trump administration deemed necessary to hold such a large-scale summit. Furthermore, the weather in January and February in Mongolia is brutally cold.

Similar to Singapore’s economic development experience, Vietnam could also share its Doi Moi economic liberalization policies adopted in 1986. Vietnam took steps to rejoining the global economy, and in 1994, the Bill Clinton administration eventually lifted the U.S. trade embargo on the country. Bilateral relations were established between the United States and Vietnam in 1995.

Diplomatic sources have pointed out that the Trump administration is avoiding directly naming potential candidates. U.S. Secretary of State Mike Pompeo, during a visit to Hanoi last July, offered North Korea a Vietnamese model of normalizing bilateral relations with the United States and pursuing economic prosperity and a vision of a “miracle in North Korea.”

Pompeo, however, will be on a Middle East tour through next Tuesday.

Likewise, there is concern that an announcement of a date and location for a second Kim-Trump summit before proper working-level talks take place to guarantee a successful outcome could rush the process.

A source in Washington told the JoongAng Ilbo Monday, “If a date and venue for a summit is announced before the State Department’s working-level talks, [preparations for the summit] will be chased for time.”

For the Singapore summit, the location was announced first by Trump and then working-level meetings on figuring out the logistics and agenda took place until the last minute.