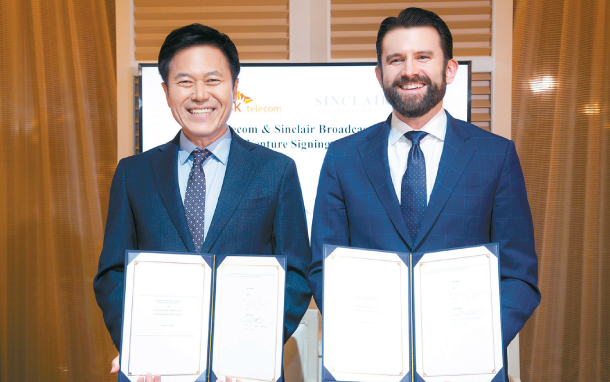 SK Telecom and Sinclair Broadcast Group, one of the largest TV broadcasting companies in the United States, agreed to launch a joint venture dedicated to developing equipment and services for next-generation broadcasting on Monday in Las Vegas.

The move is in line with the Korean mobile carrier’s latest focus on media businesses. Last week, the company announced its plan to launch a new video content service to fight Netflix in partnership with three domestic broadcasters - KBS, MBC and SBS - within the first half of this year.

SK Telecom and Sinclair will each invest $16.5 million in the new joint venture. It will focus on developing equipment and services based on ATSC 3.0, the latest version of the Advanced Television Systems Committee standard that the United States plans to commercialize and deploy as early as this year.

“All television broadcasting stations throughout the U.S. will adopt broadcasting solutions based on ATSC 3.0 within the next decade,” the mobile carrier said in a joint statement with Sinclair. “The two companies plan to actively provide ATSC 3.0 standards-based solutions to all U.S. broadcasting companies and seek other opportunities globally.”

The mobile carrier estimates the U.S. broadcasting solutions market will grow into a 20 trillion won ($17.8 billion) market in the next decade.

According to a spokesperson from SK Telecom, media consumption habits will greatly change with the new standard. TVs will become more like Netflix apps that offer video content on various mobile platforms like smartphones, tablet PCs and TVs.

The joint venture agreement comes a year after the two inked a memorandum of understanding to jointly develop leading technology for ATSC 3.0 broadcasting during last year’s Consumer Electronics Show.