GOT7 takes fans on an adventure in Thailand: The XtvN show aims to highlight new sides of the country and the boy band

GOT7 takes fans on an adventure in Thailand: The XtvN show aims to highlight new sides of the country and the boy band 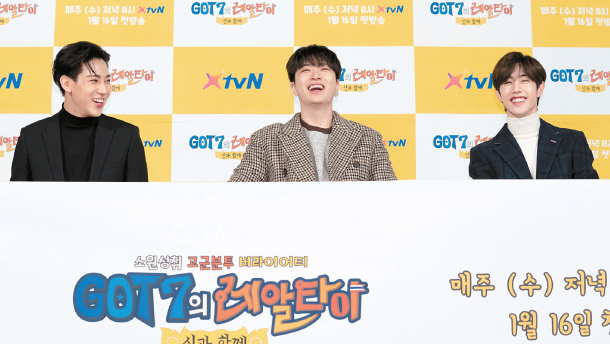 Who wouldn’t jump at the chance to take a nice trip overseas with their favorite singers? Thanks to cable channel XtvN’s latest variety show “GOT7’s Real Thai,” viewers will get the chance to see what that would be like every week. The new show will feature four members of boy band GOT7 traveling around Thailand, playing games and completing different missions as they seek the country’s best hidden spots.

The trip features GOT7 members Mark, Jinyoung, Youngjae and BamBam as they search for seven virtues found in Thai folklore. Mark, Youngjae, BamBam and producer Lee Won-hyung met with local press on Monday to introduce the show.

“[There are] a lot of tourist programs out there, but we wanted to show a side of Thailand that hasn’t been shown on TV before,” said Lee. “And when we thought about which star to feature, we decided GOT7 was a good fit because they’re very popular in Thailand. This show will also be a chance for fans to see a side of GOT7 that they have never seen before - the more human and pure side of the band.”

Producer Lee explained that he intentionally only chose four of the group’s members and not the entire boy band, emphasizing that BamBam was his top pick given he is from Thailand. While the show will certainly entertain GOT7 fans, those who are unfamiliar with the group will still be able to enjoy the show. “We just gave the members an overall guide, and let them play around,” said Lee. 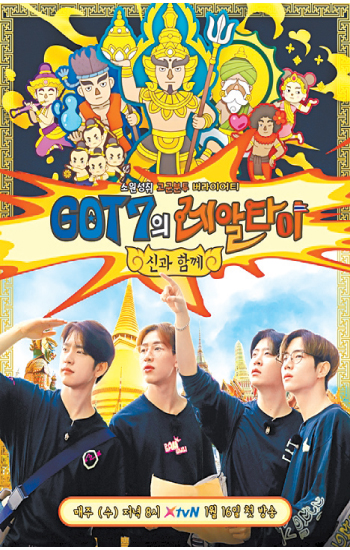 With that freedom, the members found themselves enjoying the trip more than they imagined, according to Youngjae. “There were so many factors that made it fun for us, and I sometimes even thought whether it was OK. But we had so much fun together and I really appreciated the chance to show a side of myself that I hadn’t been able to show before in other programs.”

“I was actually worried a lot, partly because I was so excited,” agreed member BamBam. “I thought that I could make the show a lot richer than others that travel to Thailand because I’m from Thailand. I thought that this was a great chance to let people know more about the country.”

The members saw this as a chance to communicate with their fans and it was in fact a chance for them to better get to know one another. “I never knew that the others were so funny, especially Mark. I’ve never seen anyone as funny as him before,” said Youngjae.

“The shooting really went well. I don’t think I’ve ever been so comfortable on a TV program before. I really let go and just tried to communicate with the other guys,” said Mark.

GOT7 is a multi-national band, with members from Korea, the United States, Hong Kong and Thailand, and they are popular across the globe. After visiting BamBam’s home country, they would like to try somewhere new if they are given the chance. “I think India would be fun, because we don’t know much about it,” said Mark.

“I haven’t had many chances to film [a program] with the other GOT7 guys,” said Youngjae. “But I think it will be fun to go somewhere where you can’t communicate, if there’s all seven of us together. It will be like teamwork.”

The show is XtvN’s first variety program of the new year, and along with the show, GOT7 is looking forward to a successful 2019.

“We did so many things in 2018, and it was a year full of happiness,” said Mark. “We will be working just as hard in 2019. I hope we get the chance to meet with our fans more and perform more. And though we don’t know when it will be, we’ll always be preparing things to show to our fans, like a new album.”

“We hope that this is a program that makes people think, ‘Wow they had that in Thailand?’ or ‘They have that kind of food there?’ I hope that the fun gets across to the viewers,” said producer Lee.