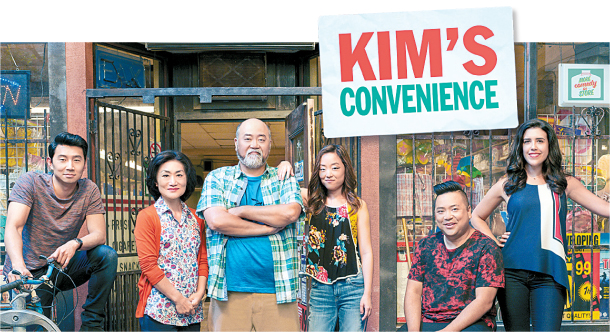 The cheerful Canadian sitcom “Kim’s Convenience” made its Korean broadcast debut last week. The show, currently in its third season in Canada and also on Netflix, will be running two episodes every weekend on TV Chosun.

The award-winning CBC television series, adapted from Ins Choi’s award-winning 2011 play of the same title, revolves around a Korean immigrant family living in Canada. The show focuses on the lives of a married middle-aged couple and their two children. As different cultures collide and generational conflicts erupt between the Korean parents and their Canadian children, the show effortlessly generates laughter and heartwarming moments.

At the center is the family patriarch Mr. Kim (Paul Sun-Hyung Lee), who runs a convenience store in Toronto and his wife (Jean Yoon) Mrs. Kim, who is nosy and meddles in the business of her two children: Janet (Andrea Bang), a college student studying art, and the estranged Jung (Simu Liu), who fled the family as a teenager following the growing tensions with his stubborn father who excessively leans into his traditional values.

There are many traditional Korean values and cultures depicted in the show, and it successfully captures the humor in such situation.

In one scene, for instance, Mrs. Kim secretly meets the boss of the car rental shop her son works at and asks the boss not to promote her son to the manager position because she does not want his son to work at the modest company. In another scene, Mr. Kim, with his strong Korean accent, tells a young customer to stop messing around in the store and eventually flicks his finger on the five-year-old’s forehead when he refuses to listen. His mother is immediately outraged and demands Mr. Kim apologize to her son. He refuses to do so, saying it is part of parenting.

His traditional values can be easily observed in his staunch bias against anything Japanese due to the country’s colonial rule over Korea from 1910 to 1945. In one scene, for instance, Mr. Kim explains an insam (ginseng) drink to a Dutch customer. When the customer refers to the drink as ginseng, Mr. Kim strongly rejects it, saying that ginseng is a Japanese term and that the two are different. 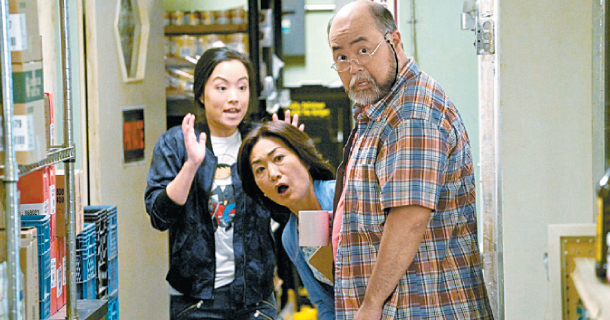 A scene from “Kim’s Convenience.” From right to left are Mr. Kim, Mrs. Kim and their daughter Janet. [CBC]

Many local viewers, however, find some of the show’s scenes over the top and argue that the family relies too heavily on western stereotypes of Asian people.

The general response towards the rare all Asian-cast North American series is positive, deeming it a win for cultural diversity. However, some are concerned about delivering inaccurate representations of Korean culture to non-Korean audiences who are not familiar with Korea.

TV Chosun’s announcement that it would start airing the show on its Facebook page was filled with users expressing their concerns.

“The mom character from the show worries sick about her daughter not being able to get married when she is only 20 years old,” wrote one comment. “I am afraid that people may equate all Korean [women] to her.”

Another person wrote, “The father from the show thinks he possesses his children. His mindset is like ‘I gave birth to you, so you are mine.’ I was especially dumbfounded after seeing the scene in which he sells off his daughter’s artworks without her permission and proudly tells her that he has the right to do so. I don’t feel comfortable about the way Asian characters are depicted because it could suggest to viewers that this way of thinking is the standard mindset of Asian men.”

“‘Kim’s Convenience’ is meaningful in that there are hardly any stories [on TV] that revolve around a Korean family in North America,” said film critic Kim Hyung-seok. “Though the sitcom may come off as a little stereotypical - especially the part where the Korean family runs a convenience store - we can’t deny there have been an improvement in [the number of] Asian roles over many years.”

Kim added, “But we can’t blame them for how they are depicting Koreans. We are doing the same when representing people from Southeast Asian countries on screen as factory workers. So instead of blaming and criticizing the producers behind ‘Kim’s Convenience,’ it [could lead to] an improvement on how Koreans are portrayed when local distributors and producers develop creative contents and collaborate with North American content creators.”

“I don’t think pop culture can show accurate aspects of everything. The fact that ‘Kim’s Convenience’ [is on TV] implies that the existence of Koreans has come into the sight in the white-centered community. Though there are over-the-top and sometimes inaccurate depictions of Korean culture, they are likely to improve in the future in Asian-centered shows that will [inevitably] follow ‘Kim’s Convenience.’”