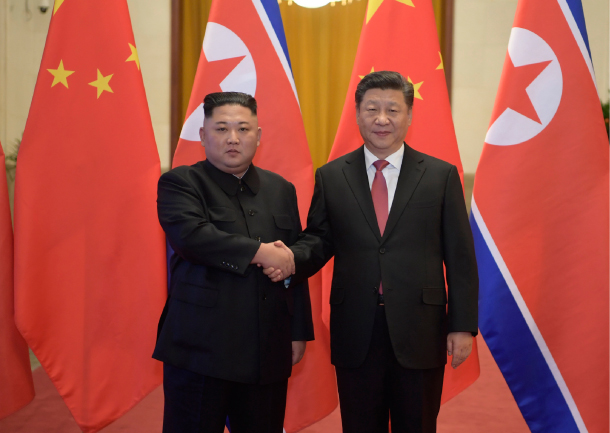 North Korean leader Kim Jong-un, left, and Chinese President Xi Jinping shake hands as they pose for a photo before talks in the Great Hall of the People in Beijing on Tuesday. The Rodong Sinmun, the official newspaper of North Korea’s Workers’ Party, published the photo in its Thursday edition. [NEWS1]

China’s Xinhua News Agency quoted Xi as saying he hopes North Korea and the United States will “meet each other halfway,” encouraging compromise between the two sides after an impasse in denuclearization negotiations.

Xinhua reported that Kim told Xi that he “will continue sticking to the stance of denuclearization and resolving the Korean Peninsula issue through dialogue and consultation, and make efforts for the second summit between DPRK and U.S. leaders to achieve results that will be welcomed by the international community.”

Kim also said he hoped that relevant parties will “positively respond” to his country’s “legitimate concerns,” pushing for a “comprehensive resolution of the Korean Peninsula issue.”

The two leaders, Xinhua further reported, were said to have agreed to make joint efforts to develop North Korea-China relations, bring more benefits to people of the two countries and make positive contributions to peace, stability, prosperity and development of the region and the world.

On Thursday, Kim concluded a four-day trip to China, his fourth visit to the country since last March.

In a rare move, North Korean and Chinese state media on Tuesday morning simultaneously reported on Kim Jong-un’s trip to China hours ahead of the leader arriving in Beijing. The two countries, however, refrained from revealing details of Kim and Xi’s summit and meetings over Tuesday and Wednesday until Thursday morning, after Kim’s return to Pyongyang.

In contrast to China’s report, North Korean state media reports did not directly refer to plans for a second summit between Kim and Trump.

But South Korean President Moon Jae-in on Thursday expressed his belief that Kim Jong-un’s visit to China was an indicator that a second North-U.S. summit is around the corner.

The North’s official Korean Central News Agency (KCNA) reported Thursday morning details of Kim’s four-day trip to China, which came upon the invitation of Xi. The Kim-Xi summit was likewise covered on the front page of the North’s official newspaper, the Rodong Sinmun.

The two leaders, the KCNA reported, “agreed on continuously preserving the stand for final and peaceful settlement of the nuclear issue on the Korean Peninsula to meet the interests of the international community” by “properly managing the situation on the peninsula,” which it said has “entered an important and vital time.”

During his talks with Xi, Kim was quoted as saying that the North remains unchanged in its stance “to keep the goal of the denuclearization of the Korean Peninsula, sincerely implement the joint statement adopted at the Singapore DPRK-U.S. summit talks and seek a negotiated, peaceful solution.” Trump and Kim on June 12 signed a joint statement in which the United States offered security guarantees for the North’s complete denuclearization.

But Kim was reported to have noted the “difficulties and concern arising in the course of the improvement of the DPRK-U.S. relations and the negotiations for the denuclearization and the prospects of resolving them.”

Xi was said to have replied that “reasonable points of concern should be resolved properly,” and that parties concerned should “prioritize and reasonably tackle them.”

The KCNA reported that Xi said China would “play a positive and constructive role for the defense of the fundamental interests of both sides and the stability of the situation on the peninsula.” Pyongyang has been demanding corresponding measures from Washington for its efforts toward denuclearization, especially an easing of sanctions. But the reports on the Kim-Trump summit did not directly refer to United States’ sanctions, an issue which would be sensitive for Beijing’s relations with Washington.

Xinhua similarly reported Xi saying that China will work with North Korea and relevant parties “to play a positive and constructive role in maintaining peace and stability and realizing denuclearization on the peninsula.” Trump has sometimes blamed Beijing as meddling in the denuclearization negotiations with Pyongyang.

Kim Jong-un was flanked by key aides on the denuclearization issue such as Kim Yong-chol, the vice chairman of North Korea’s ruling Workers’ Party’s Central Committee, and Foreign Minister Ri Yong-ho during the summit with Xi.

The KCNA described the talks as proceeding in a “warm, comradely and friendly atmosphere from beginning to end.”

Kim’s Beijing trip, it reported, was also an opportunity to demonstrate to the world “the invariability and invincibility of the DPRK-China friendship.” Kim again invited Xi to make an official visit to Pyongyang “at a convenient time” and the Chinese president accepted the invitation.

During a welcome banquet later that evening, Xi in his congratulatory speech stressed the traditional bilateral friendship while stressing “a new stage of development” as the two countries mark the 70th anniversary of the establishment of diplomatic relations this year. The KCNA gave further details of Kim’s itinerary in China.

A special train carrying Kim, his wife Ri Sol-ju, younger sister Kim Yo-jong and key aides arrived at China’s border city of Dandong in Liaoning Province, at 9.30 p.m. on Monday. They were greeted in Dandong by Chinese officials including Song Tao, head of the International Liaison Department of the Chinese Communist Party.

Kim and his entourage arrived at Beijing Railway Station Tuesday at around 11 a.m. and were greeted by Wang Huning, Xi’s chief ideologist and a member of the Chinese Communist Party’s Politburo Standing Committee and Cai Qi, a member of the Politburo and the party chief of Beijing. Kim and Xi held their summit in the Great Hall of the People starting at 5 p.m., accompanied by their wives, and attended a banquet afterward with a special performance by Chinese artists.

On Wednesday morning, Kim toured the Tong Ren Tang pharmaceutical plant in Beijing, and later, the two leaders and their wives reunited for a luncheon at the Beijing Hotel.

Kim departed Beijing later that afternoon and was again sent off by top-level party officials including Wang Huning, Cai Qi and Song Tao.

Li Jinjun, Chinese ambassador to Pyongyang, traveled with Kim to the Dandong Railway Station to see him off. Kim, before leaving Dandong, was said to have sent a personal letter to Xi thanking him for his hospitality.

China’s state broadcaster China Central Television (CCTV) also covered Kim’s visit in a 10-minute report Thursday morning covering the bilateral talks and the leaders reviewing an honor guard at a welcoming ceremony, viewing a performance and having lunch the next day.