2018 sales were lousy for restaurants and bars

2018 sales were lousy for restaurants and bars 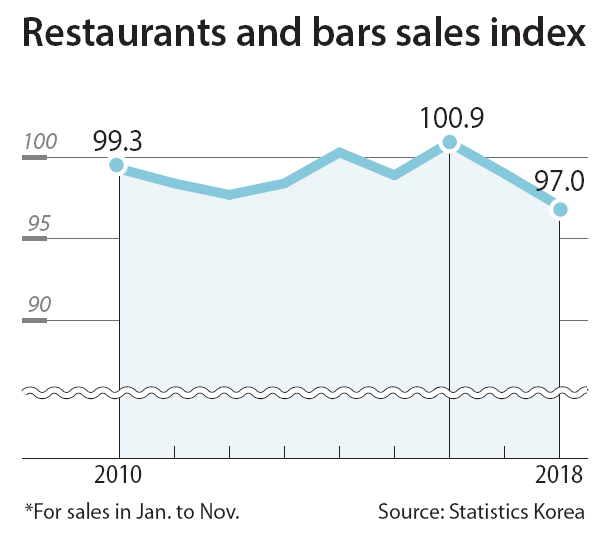 Restaurants and bars suffered their worst sales since 2010 last year, according to Statistics Korea on Saturday.

The restaurants and bars sales index for 2018 excluding December was 97.0 at constant prices, the lowest figure for that period since the statistics agency began compiling data in its current form in 2010. Statistics Korea calculates sales indices for the country’s restaurants and bars every month with January 2010 as the base month.

According to Statistics Korea, the 2018 restaurants and bars sales index also suffered the biggest percentage drop since 2010, falling 2.0 percent in comparison to the same period in 2017. After peaking in 2016, the index has been on a steady decline, falling 1.9 percent in 2017 year-on-year as well.

Agency officials believe that a fall-off in after-work company dinners and a decline in Chinese tourists can explain the poor sales.

“We suspect that the demand for eating out at restaurants has declined as office workers have fewer after-work company dinners given the recent emphasis on work-life-balance,” Min Gyeong-sam from Statistics Korea’s Economic Statistics Bureau told Yonhap News Agency.

“The rise of single-person households also led to more consumers purchasing food online or at convenience stores,” he added.

The official also pointed to China’s stopping of tour groups to Korea in retaliation for the deployment of the U.S.-led Terminal High Altitude Area Defense (Thaad) anti-missile system as another factor that brought down restaurant sales. The number of Chinese tourists - traditionally Korea’s largest tourist source - fell by nearly 60 percent at the height of tensions after Beijing banned group tours to Korea in 2017.

There were 45,000 fewer people working in restaurants and accommodation services in 2018 compared to the previous year, according to Statistics Korea.

On the other hand, restaurant alternatives, like convenience stores and deliveries, grew. The domestic convenience store industry is estimated to be worth over 22 trillion won ($19.67 billion) as of last year, while the food delivery market is valued at 15 trillion won.