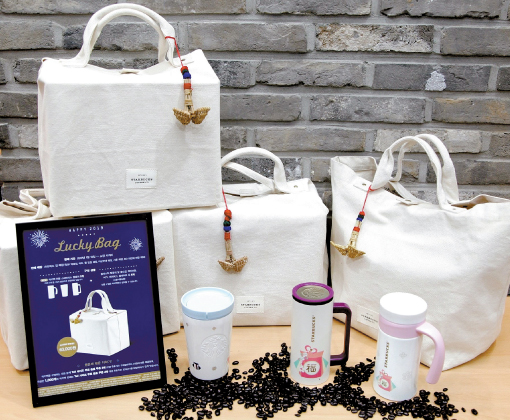 Starbucks Korea’s 2019 Lucky Bag. The set came with one of three stainless tumblers and was the first to come in an eco-friendly package. [STARBUCKS]

Lee Min-joo, a 43-year-old cram school teacher, made it a point to be at the Starbucks outlet near her house last Thursday at 6 a.m. She wasn’t there for the coffee - she was waiting to buy a limited edition “Lucky Bag.”

Lee said she has bought Starbucks Lucky Bags for nine years in a row. She confessed that two years ago, she was in line at 5:30 a.m.

“I am a collector of diverse Starbucks products,” Lee said. “And I always get curious as to what’s in the bag.”

This year, Starbucks’ Lucky Bags are bigger than ever.

Lucky Bags were the most-searched term on the internet in Korea last Thursday and social media was abuzz with people posting pictures of the products they got in their Lucky Bags.

Four stores near Seosomun, central Seoul, were sold out before 10 a.m.

Lucky Bags are mystery bags sold at a given price, 63,000 won ($56) this year. The products contained in the bags are unknown to the customers who buy them. The value of the goods inside exceed the selling price.

Starbucks introduced its Lucky Bags in 2007 and they have become the chain’s unique annual New Year’s ritual in Korea and Japan.

One of the reasons Starbucks’ Lucky Bags sell out so quickly is their limited supply.

Each customer is only allowed to buy one Lucky Bag.

Lucky Bag devotees have now become a tribe with their own nickname. They call themselves “Sudeok,” which combines the first Korean syllable of the chain’s name as pronounced by Koreans, “Su,” with “deok,” a shortened version of deokhoo, Korea’s own version of otaku, Japan’s term for a person with obsessive interests.

The Sudeoks who purchase Lucky Bags even swap items to get the items they really want.

“It’s a good marketing strategy that combines a limited edition appeal and the emotional appeal of winning a jackpot,” said Lee June-young, a professor who studies consumer trends at Sangmyung University.

But not every Lucky Bag fan is satisfied with their haul.

On social media, one disappointed fan posted a message reading, “It is not a Lucky Bag, it is an unlucky bag.” Another wrote, “The only lucky one is Starbucks.”

“I have been buying the Lucky Bags for three years, but this year I decided not to because of the 60,000 won price tag,” said Lee Hyun-jeong, a 29-year-old office worker.