Fine dust chokes much of Korea Sunday, will continue tomorrow

Fine dust chokes much of Korea Sunday, will continue tomorrow 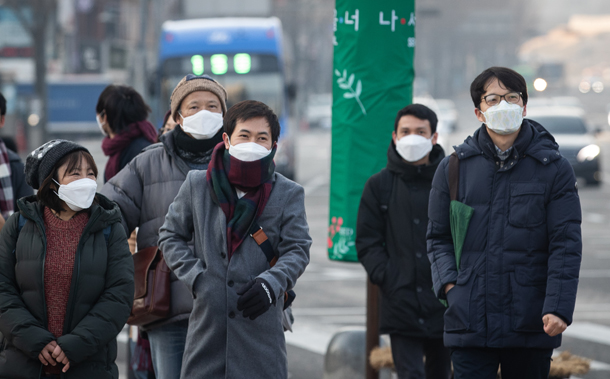 Seoul and surrounding areas will be blanketed in unhealthy levels of fine dust particles through today, a local research station said Sunday as the air quality severely worsened.

The level of PM2.5 fine dust particles reached an average of 73 micrograms per cubic meter of air in districts in Seoul Sunday morning, according to the National Institute of Environmental Research (NIER), a government-established think tank.

PM2.5 fine dust particles are particles less than 2.5 micrometers in diameter and about 30 times smaller than the width of a human hair. The World Health Organization (WHO) describes them as carcinogenic since PM2.5 particles can travel through the respiratory tract and reach the bloodstream, causing lung cancer and other lung conditions, as well as heart conditions and strokes.

Most of the country experienced unhealthy levels of fine dust particles in the air Sunday. The level of PM2.5 reached 85 micrograms in the afternoon in Gyeonggi, 81 micrograms in Sejong and 93 micrograms in North Chungcheong.

NIER forecast that due to stagnant air and inflowing fine dust particles from outside of the country, the high levels of fine dust will persist Monday throughout the country.

There have been disagreements on how much of the fine dust particles in Korea are domestically produced or inbound from overseas.
In joint research conducted in May and June 2016 between NIER and NASA, 52 percent of the air pollutants in the country were found to have been produced locally, while 48 percent were attributed to external factors — about 34 percent of which were from China.

“For fine dust particles from China to land in Korea, they will have to travel on the uppermost level of the atmosphere,” an air quality expert from the Chinese Academy of Sciences told the JoongAng Ilbo on the condition of anonymity. “I think only 10 percent of Beijing’s fine dust particles will travel that high and into Korea.”

“It’s true that there are lots of air pollutants coming from these ports,” one air quality expert told the JoongAng Ilbo. “But there haven’t been studies on this topic in China yet.”

“There are differences in the level of inbound fine dust particles every year depending on different states of climate and weather,” said Jang Im-seok, head of the air quality forecast center of NIER.

But domestic factors, like the number of diesel cars in Korea, also contribute.

Local governments together with the Ministry of Environment initiated an emergency fine dust reduction measure in Gyeonggi, Incheon and Seoul Sunday. The measure includes shutting down operations at some coal power plants, limiting the number of old diesel-fueled cars on the road and banning half of the number of public officials’ vehicles from the road. The latter was not implemented Sunday as it was the weekend.

In November, the three local governments and the ministry agreed to jointly initiate the emergency fine dust reduction measure whenever the PM2.5 level is expected to, or exceeds, 50 micrograms in two out of the three regions on a given day. They intend to expand the banning of cars on the roads from public officials to private citizens after Feb. 15, following an enactment of a special law regarding fine dust reduction.