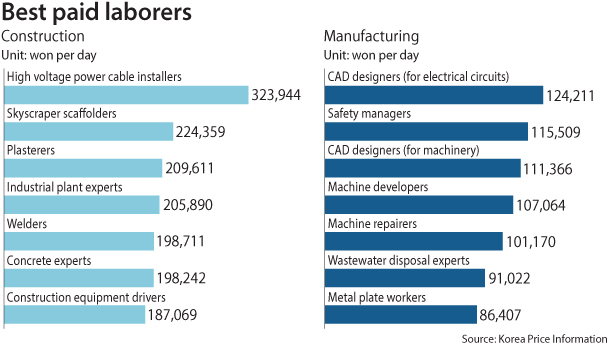 The wage gap among laborers in manufacturing and construction is widening, according to industry data.

The Construction Association of Korea (CAK), Korea Federation of Small and Medium Business (KBIZ) and Korea Price Information jointly conducted a study that compared the average payments for 30 different jobs in construction and manufacturing sites. Wages are calculated on the assumption that laborers work eight hours a day.

Among the 30 jobs, the highest paid was installing and maintaining high voltage power cables, which pays an average 323,944 won ($290) per day. This means if the laborer works 20 days a month, they can receive nearly 6.5 million won. The job involves the installation of new power cables and repair of existing ones. The cables transfer more than 7,000 volts of electricity and working with them requires a government-approved certificate.

“Handling power cables is a dangerous job and requires a lot of technique and experience - so experts in this field are old and there aren’t many newcomers,” said Lee Dong-hoon, a researcher at the Korea Price Information. People with expertise in the field are so rare that the Korea Electrical Contractors Association are looking overseas to recruit.

Other high-earning jobs involve similar levels of danger and training. Installing temporary structures for the construction of skyscrapers, a sort of high-risk take on scaffolding, came in second. Laborers are paid an average 224,359 won per day. Cement plasters came in third at 209,611 won per day.

Painting or writing letters on buildings walls and ships was worth 184,508 won a day. The job is more dangerous that it might sound due to the risk of suffocating from paint fumes in often enclosed spaces. Apartment exterior wall painters, of whom there are less than a hundred nationwide, often work hanging as high up as 60 meters (197 feet) of the ground. Some painters earn up to 100 million won a year.

Plumbers in Korea earn an average of 176,011 won per day. However, the job is much better paid in advanced countries like the United States, Canada, Australia and New Zealand, leading to a sort of “drain drain,” a Korean take on the brain drain in which plumbers head overseas in search of better paying jobs.

On the other hand, some jobs in the manufacturing sector pay less than 100,000 won a day. Laborers that print labels containing product information and specs make an average of 78,763 won. Deliverymen who install electronics at customers’ homes make just 74,250 won, while workers on food factory conveyor belts earn 72,847 won, making them among the lowest paid.

At the bottom of the list were simple labor workers, which refer to cleaners, janitors and deliverymen. They receive around 10,000 won more than the minimum wage of 66,800 won for eight hours of labor. Jobs on the lower end of the list are relatively simple and less risky and therefore have a low entrance barrier for starters.

Naturally, jobs that receive wages similar to the legal minimum threshold are unpopular with job seekers.

“If the pay is similar, people tend to avoid harder tasks in the construction and manufacturing sectors and prefer easier ones [in other industries],” said Kwon Hyuk, professor of labor law at Pusan National University.

Over the last two decades, the gap between the legal minimum wage and the lowest paid jobs in such industries has narrowed. For example, in 1990, the minimum wage was equivalent to 58 percent of what simple labor workers received. This year, it accounts for as little as 93 percent.