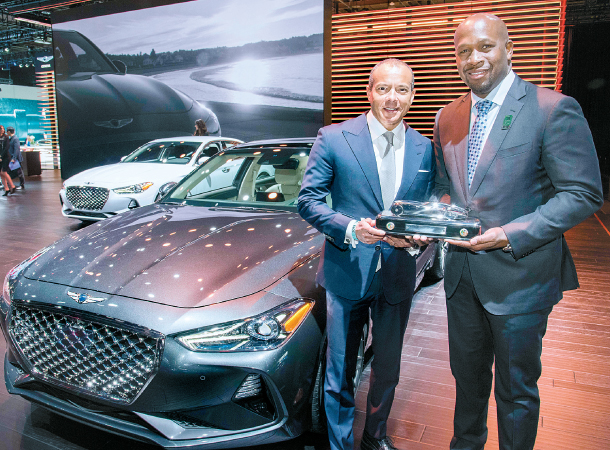 Manfred Fitzgerald, executive vice president and global head of the Genesis brand, left, and Erwin Raphael, executive director at Genesis Motor America, pose for a photo in front of a Genesis G70 after the car won at the 2019 North American Car of the Year Awards in Detroit on Monday. [HYUNDAI MOTOR ]

Hyundai Motor Group took home the top prizes in two of three categories at the 2019 North American Car, Utility and Truck of the Year Awards (Nactoy), the company said Tuesday.

It is the first time a Korean carmaker has won in two categories at the annual awards.

Hyundai Motor’s Kona and Kona Electric crossover utility vehicle won in the utility category, while the G70 sedan sold under the carmaker’s Genesis brand won in the car category.

A jury consisting of journalists and analysts based in the United States and Canada voted for the winners of each category, choosing between three finalists. This year, 54 journalists from print, online and broadcast media participated in the assessment.

The award organizer said in a press release that jurors voted on the finalists based on segment leadership, innovation, design, safety, handling, driver satisfaction and value for the dollar. 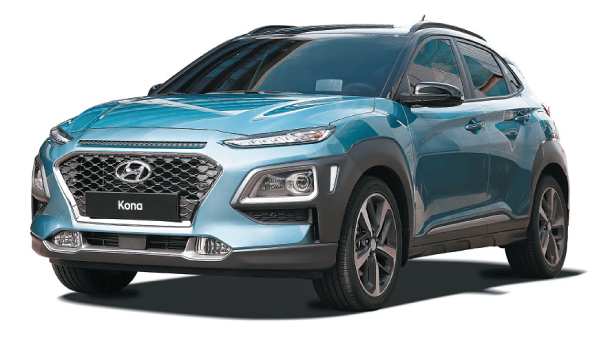 The G70 competed with the Honda Insight and Volvo S60. The Genesis-brand was evaluated to exceed luxury segment mainstays like the BMW 3 Series, Audi A4 and Mercedes-Benz C-Class in driver engagement and value for the dollar.

The last Hyundai car to win top honors at the awards was the Avante sedan, sold as the Elantra in North America, in 2012.

Previously the award only had two categories - car and truck - however, utility vehicles earned an independent category from 2017, considering the rising popularity of the segment.

A Hyundai spokesperson said it will market the Kona and G70 more actively in the North American market with boosted presence from the awards.

The winners were announced at the North American International Auto Show in Detroit on Monday. Hyundai also introduced its Veloster N TCR high-performance racing car at the show, while Kia Motors premiered its Telluride SUV. The SUV will only be sold in the North American market.