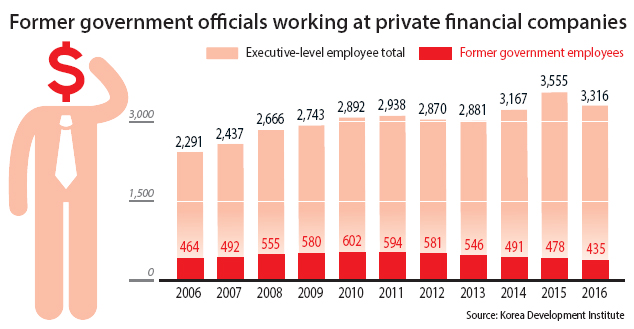 Financial companies hiring former financial officials is the subject of a recent study by the Korea Development Institute (KDI), the state-owned think tank. The conclusions of the study, released Tuesday, are mixed.

The KDI found that the employment of these ex-officials did in some cases reduce penalties faced by the financial companies. But it also found that having former financial officials on the payroll did not necessarily contribute to soundness and stability.

The study focused on risk management at 61 financial companies and the hiring of former government employees from the Financial Supervisory Service (FSS), the Financial Services Commission (FSC), the Ministry of Economy and Strategy, the Bank of Korea and the Korea Deposit Insurance Corp.

Performance indicators, such as profit-to-risk-weighted-assets and the insolvent asset ratio, were examined.

“There have been ongoing discussions about the practice of hiring financial authority officials by private financial companies,” said Lee Ki-young, the KDI researcher. “This study analyzes the economic influence of those revolving-door personnel.”

According to the KDI report, between 2006 and 2016 private financial companies employed an average of 2,889 high-ranking employees.

Former government officials were 18.6 percent of the total, or 529. Of those, 120 came from the FSS. That is 4.3 percent of high-ranking employees at financial companies. The FSS was followed by the Financial Ministry, which provided 103 employees, or 3.6 percent of the financial executives.

“Many were former employees of the FSS,” Lee said.

The researcher said while the hiring of former financial-authority officials could contribute to the lowering of risks given the skills they built up at their respective ministries, the possibility also exists that they were used mainly for their lobbing abilities given their connections to their former employees.

“We have found that when former FSS employees have been hired, the possibility of regulatory action against the company because of the increasing ratio of insolvent assets fell,” Lee said. “It is possible to interpret this as meaning the revolving-door employees helped.”

But the KDI researcher added that aside from reducing actions related to the insolvent-asset ratio, expertise from the officials did not help in other ways.

The study also determined that hiring other government officials, such as those from the Finance Minister - the Bank of Korea and the FSC - didn’t change the number of penalties.

In terms of risk management, only former central bank officials seemed to help their new employers.

The study concluded that the relationship between the financial company and the regulator has the potential to be illegal if the hiring of an official is done without care.

Revolving-door “officials may not contribute significantly to improving the soundness of a financial company, but they could help in reducing non-fiscal risks by preventing various infractions, such as selling financial products without properly informing the consumers or leaking private customer information,” Lee said.