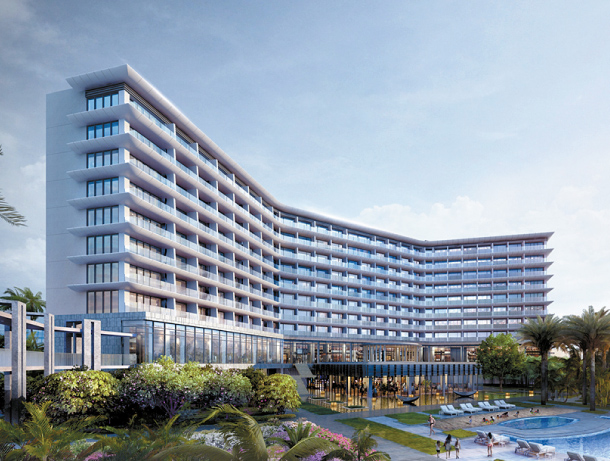 A computer image of the Shilla Monogram in Da Nang, Vietnam, scheduled to open this year. [HOTEL SHILLA]

Hotel Shilla announced Tuesday that it will actively begin expanding its brand abroad this year, the first new location being a resort in Da Nang, Vietnam.

“Starting with Da Nang, we hope to expand our brand to more than 10 overseas locations in Southeast Asia, United States and China,” the hotel company said in a statement.

It also runs 11 business hotels under its Shilla Stay name.

The company said that it will expand overseas through hotel management agreements with local companies, a common structuring for hotel chains. This means the local partner will own the hotel building while Shilla will operate the business. For Shilla, this minimizes investment risks.

Shilla’s new Da Nang hotel - slated to open this year under the brand-new Shilla Monogram name - will be a nine-floor building with 300 rooms. The hotel will be located on Non Nuoc Beach in Da Nang, a popular destination for Korean tourists.

The hotel, still under construction, will feature an outdoor pool, restaurants and bars. Every room will be equipped with a balcony.

Hotel Shilla also announced that it is preparing to open a 200-room premium business hotel in San Jose in Silicon Valley, California, under its Shilla Stay brand by 2021.

Hotel Shilla has been operating Jinji Lake Shilla Hotel in Suzhou, China, since 2006. It was the first overseas hotel managed by the company.

As for upcoming domestic projects, Hotel Shilla is planning to open a hotel themed after hanok, or traditional Korean houses, by 2023 in central Seoul.

If the company receives approval to build the new hotel from domestic land authorities, it will become the first to operate such a hotel in Seoul.