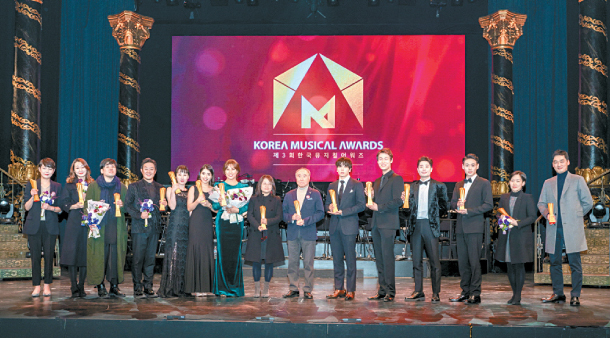 Award winners at this year’s 3rd Korea Musical Awards, organized by the Korea Musical Theater Association and the Arts Council Korea, pose for a photo after the event on Monday evening at the Blue Square in Hannam-dong, central Seoul. [SHON COMPANY]

The Korean production of a musical “The Man Who Laughs” took home the Grand Prize at the 3rd Korea Musical Awards which was held Monday evening at the Blue Square in Hannam-dong, central Seoul. The musical, produced by EMK Company, has been praised for its quality, especially in the stage design put together by designer Oh Pil-young. The musical was also recognized for expanding the possibilities of Korean musicals.

Although the musical may seem to be a localized version of a foreign show, “The Man Who Laughs” was created in Korea and is based on the novel of the same name by French writer Victor Hugo. Set in 17th-century England, the musical revolves around the main character Gwynplaine’s life and the unfair treatment she endures from society. The main character is played alternately by singer and musical actor Park Hyo-shin, Park Kang-hyun and Suho of the boy band Exo.

The night’s Best Male Actor Award went to Park Hyo-shin, who also contributed a lot to the musical’s sell-out performances throughout 2018. The co-recipient of the award was Choi Jae-rim who is starring in the musical “Matilda” as the nasty Miss Trunchbull. As for the Best Female Actor Award, veteran actor Jeong Young-zoo, who played the leading role in the musical “Bernarda Alba,” which is based on the play “The House of Bernarda Alba” by Spanish dramatist Federico Garcia Lorca. The supporting male and female actor awards went to Han Ji-sang from “A Gentleman’s Guide,” and Kim Gook-hee from the “Red Book.”

The evening’s Best Ensemble Award went to the cast of the musical “Matilda.” The Korean production of this popular sell-out musical is currently being staged at the LG Arts Center in southern Seoul and will run through to Feb. 10.

As for Best Stage Design, designer Oh behind “The Man Who Laughs” took home yet another award, while director Oh Kyung-taek and choreographer Hong You-seon of the “Red Book” respectively received the Best Director’s Award and the Best Choreography Award. The Best Music Award went to music director Kim Seong-soo of “Bernarda Alba.”

One of the unique aspects of the Korea Musical Awards, co-organized by the Korea Musical Theater Association and the Arts Council Korea, is that it puts producers under the limelight as well. Producer Park Myung-sung of the Seensee Company was awarded the Best Producer Award for “leading the growth of Korea’s musical industry in 2018,” according to the organizers. The Seensee Company staged “Billy Elliot” in the first half of 2018 and “Matilda” in the second half, attracting both young and old to theaters.

The awards created a new prize for its third edition called the “New Wave Award,” which attempts to recognize musicals that are freshly produced in Korean using experimental techniques. This new prize went to the musical “Ready to Fly,” which was created by students and graduates of the CK Musical School.