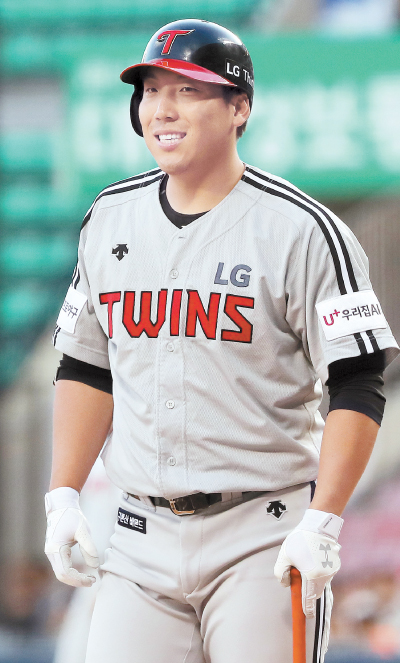 The LG Twins has a tradition of selecting their captain each season based on votes cast by the club’s coaching staff and front office members. This year, manager Ryu Joong-il decided to make a unilateral decision, naming Kim Hyun-soo as captain.

Ryu’s selection came as quite a surprise to many, as Kim has only played one season with the Twins.

“I had no idea that I would become captain,” Kim said. “I have my own style so I was a little worried if the players would agree with it and come along. I don’t think I’ll make big changes in style.”

Before Kim left to play in the United States, he played 10 seasons in the KBO with the Doosan Bears, the Twins’ biggest rival.

After two years in the major leagues, Kim returned to the KBO in 2017. When he announced his return, many Bears fans believed that he would go back to his home team, but instead he signed a four-year contract with the Twins at 11.5 billion won ($10.2 million). With the signing, Kim became the second-highest-paid free agent (FA) in the KBO at the time.

The Twins once again failed to advance to the postseason even with the big investment, but Kim still lived up to expectations by topping the batting average in the KBO, at .362, with 20 home runs and 101 RBIs.

Off the field, Kim has become a good role model for the younger players. Even during the regular season, he works out at the gym about three to four times a week and his teammates, too, have started doing the same. Last year, the Twins’ Chae Eun-seong had his best career season after following Kim’s lead. Chae had a .331 batting average with 25 home runs and 119 RBIs. As he had a .267 batting average with two home runs and 35 RBIs in the 2017 season, the improvement proved to many Twins players that Kim’s training regime works.

Due to this, a lot more players have joined Kim’s training sessions in the offseason.

“Since [Chae] Eun-seong saw big improvement last year, I think the other players started to follow along,” Kim said.

“I also used to think that a baseball player just needs to be a good runner and train well. But when I played with Doosan veteran players like Son Si-hyun, Lim Jae-cheol and Kim Dong-joo, and spent a lot of time in weight training as well. I started working out thinking that I’d do the same as them. It definitely helped in terms of maintaining my condition.”

In the dugout, Kim is once again expected to boost the players’ energy throughout the games. Rather than growing discouraged while losing, Kim hopes to keep the players’ emotions consistent in any situation in the dugout.

“Last year in the dugout, the team’s atmosphere was so different when we were winning or losing,” Kim said. “There were players that looked very discouraged. The regular season is a long-distance race where we have to play 144 games. Just because we lost today doesn’t mean that we’ll lose tomorrow. I want the players to have fun. It’s important to keep their style.”

As the Twins’ new captain, Kim’s goal is the same as everybody else - to play in the postseason. To achieve the goal, Kim has started practicing at first base. Kim’s main position is that of left fielder, but last season he also played as first baseman due to injuries.

As a left fielder, Kim played in 518 and two thirds innings. As a first baseman he played in 452 and one third innings.

Although Ryu said he’ll assign Kim as the starting left fielder this season, he will continue practicing his defense at first base so he’s ready to fill any position when needed.

For the Twins to get to the postseason, they have to beat the Bears this year. Last year the Bears dominated the Twins for the entire season, with LG just managing to get a consolation win in the last game of the season. The head-to-head record ended with the Bears up by 15 games to one.

“I spent more time watching our last game against the Bears [which Kim didn’t play in] than the postseason games,” Kim said. “It’s hard not to care about our games against Doosan because we share Jamsil Stadium with them. We’re called their rivals, but based on our record, it’s hard to be called their rivals. I told our players to accept it.

The Twins will be heading to Sydney for their first offseason training on Jan. 30.