Astro returns with a new, angelic look: The group’s first full-length album ‘All Light’ is an energetic pop spectacular

Astro returns with a new, angelic look: The group’s first full-length album ‘All Light’ is an energetic pop spectacular 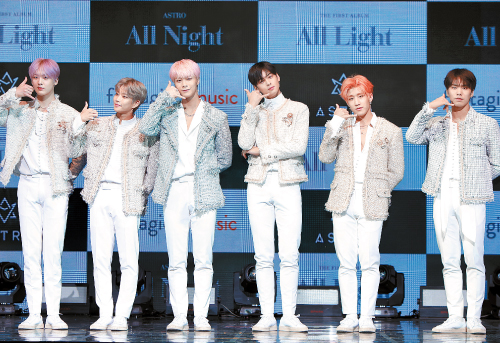 After debuting with the EP “Spring Up” in 2016, the group has released a number of other EPs and the members have also kept busy appearing in a number of dramas and reality programs. “All Light” is packed with 10 energetic pop songs sure to please the group’s loyal fans.

The group’s showcase aired on live streaming app V Live on Wednesday at 8 p.m. Before the show even began, the stream had attracted more than 200 million likes from fans awaiting the performance.

The album’s lead track “All Night,” a dance pop track featuring a melodic piano sound, was co-written by members Jin Jin and Rocky, with the help of other songwriters.

“The key point [of the lead track] is its catchy melody,” said Moonbin during a press showcase held at Coex, southern Seoul, on Wednesday. “The song is about the ardent desires of someone who wants to call their significant other all night.”

The concept-driven album takes listeners on a journey to the members’ “eternal garden,” where each of them are dressed up as modern angels and gardeners. The members themselves were dressed in white suits with glitter jackets at the press showcase to resemble “angelic gardeners,” according to Jin Jin.

“Our choreographer said that we were ‘angels singing to heaven,’” said Moonbin.

“The album shows our desires to make our dreams come true in an eternal garden,” added Cha. But wearing white suits had its drawbacks, too.

“When we were filming the music video for the lead track, our white pants got all dirty,” said Cha, pointing to his knee, which had a little stain on it during their showcase performance. “We had to change clothes often, and it took a long time [to finish filming the video].”

Throughout the showcase, the members emphasized how “grown-up” they are now, compared to the year before. The youngest member, Yoon, has just turned 20 in Korean age this year.

“I can’t believe I’m an adult already,” he said. “It means that I have more responsibilities to take, and in some way, I wish I could return back to being [a teen].”

“I tend to think from different perspectives [regarding a subject matter],” said Moonbin. “Also, I’ve realized the importance of my two senior members here. I talk a lot about my inner feelings with Jin Jin, the leader of the group, and he listens well to my stories. I also talk a lot with MJ, and whenever I do, I feel more relaxed.”

The concept of the new album, according to Jin Jin, is “dreamlike sexiness.”

“We tried to express different kinds of sexiness [in our previous albums,] and this time, we tried to show a more dreamlike - a warmer kind of - sexiness,” he said. “The album reflects a lot of our thoughts, so we are satisfied with how the album turned out.”

During the hiatus, each member was busy acting in various dramas and appearing on reality programs.

Member Cha was the busiest of all - he made a name for himself as an actor in his first role on the JTBC hit series “My ID is Gangnam Beauty” last year.

He played Do Gyeong-seok, a popular and good-looking student who falls in love with a classmate who suffers from low self-esteem after having plastic surgery.

According to Jin Jin, the members are now more mature and are able to show off their true charms.

“We have become ‘faster’ as a team,” he said. “It took six hours on average to record a song before, but now, it only takes three hours. We have higher hopes for the group, which is why we are finally able to appeal more [to our fans and public].”

The group has always been aiming for the No. 1 spot in the music charts, but it has not been easy.

“[If we reach No. 1 or No. 19 on the charts,] we will dress up as angels and decorate the stage as heaven,” promised Jin Jin.