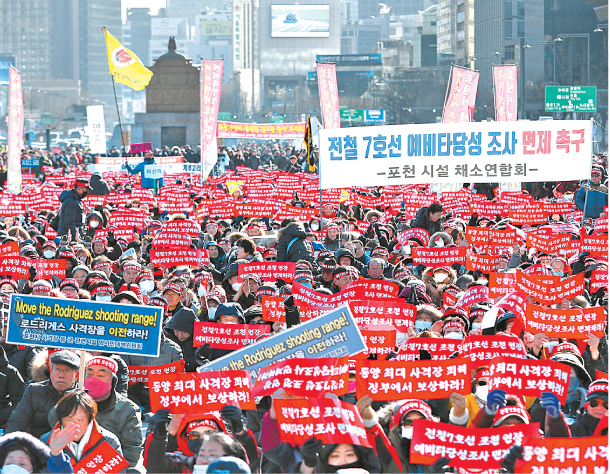 Pocheon, Gyeonggi, residents stage a rally to demand Seoul Metro continue with plans to extend Line No. 7 to the city, in Gwanghwamun Square, central Seoul on Wednesday. Around 1,000 protesters also had their heads shaved at the rally to demand that Line No. 7 come to Pocheon. [YONHAP]

Around 10,000 residents of Pocheon, Gyeonggi, held a rally around Wednesday in Gwanghwamun Square, central Seoul, to demand that Seoul Metro continue with a plan to extend Line No. 7 to Pocheon.

The mayor of Pocheon, Park Youn-kook, said at the beginning of the rally that, “Pocheon is at its crossroads of regional development and enhancement. What we’re doing right now is an appropriate action that is crucial for the future of Pocheon.”

About 1,000 people also had their heads shaved at the rally.

The government is currently reevaluating the feasibility of several stations on the extension of Line No. 7, and many Pocheon residents fear the station planned for their city will never be built.

The extension of Line No. 7 is a government project to create a one-way passage from Mount Dobong in Seoul to Pocheon.

This extension will cover about 19.3 kilometers (12 miles) in total, and will cost about 1.4 trillion won ($1.25 billion). Construction of the first section of the extension from Mount Dobong to Okjeong-dong, located in Yangju, Gyeonggi, is planned to start in the second half of this year and the extension is expected to open in 2024.

According to local transportation experts, if the project is finished, traffic conditions for the residential areas near the station such as Okjeong-dong and Songu-ri will be improved. The extension will also enhance the accessibility of universities in Pocheon, such as Daejin University, CHA University and Kyungbok University, and could revive the local economy.

Pocheon has long faced strict governmental regulation due its many preservation sites and large amount of military infrastructure, such as a U.S. military shooting range. This has taken a toll on the local economy and population. According to the standards of the Seoul Metro’s preliminary feasibility study, Pocheon is the least desirable place to include in the rail extension. It is also the most isolated out of all the stations.

“Our city is the only place with no railroads of any sort in all of northern Gyeonggi,” said Pocheon Mayor Park. “We have been putting up with such inconvenience for the sake of national defense - and if the government gives us the cold shoulder and excludes Pocheon, that is disrespecting our sacrifice. This is why the subway Line No. 7 should be extended to Pocheon.”

Pocheon residents are reportedly to hold a sit-in protest and block traffic to the U.S. armed forces shooting range in the city if the construction of its Line No. 7 station is canceled.