‘I Can See Your Voice’ hopes to find new talent: The sixth season of the hit singing show promises more thrills

‘I Can See Your Voice’ hopes to find new talent: The sixth season of the hit singing show promises more thrills 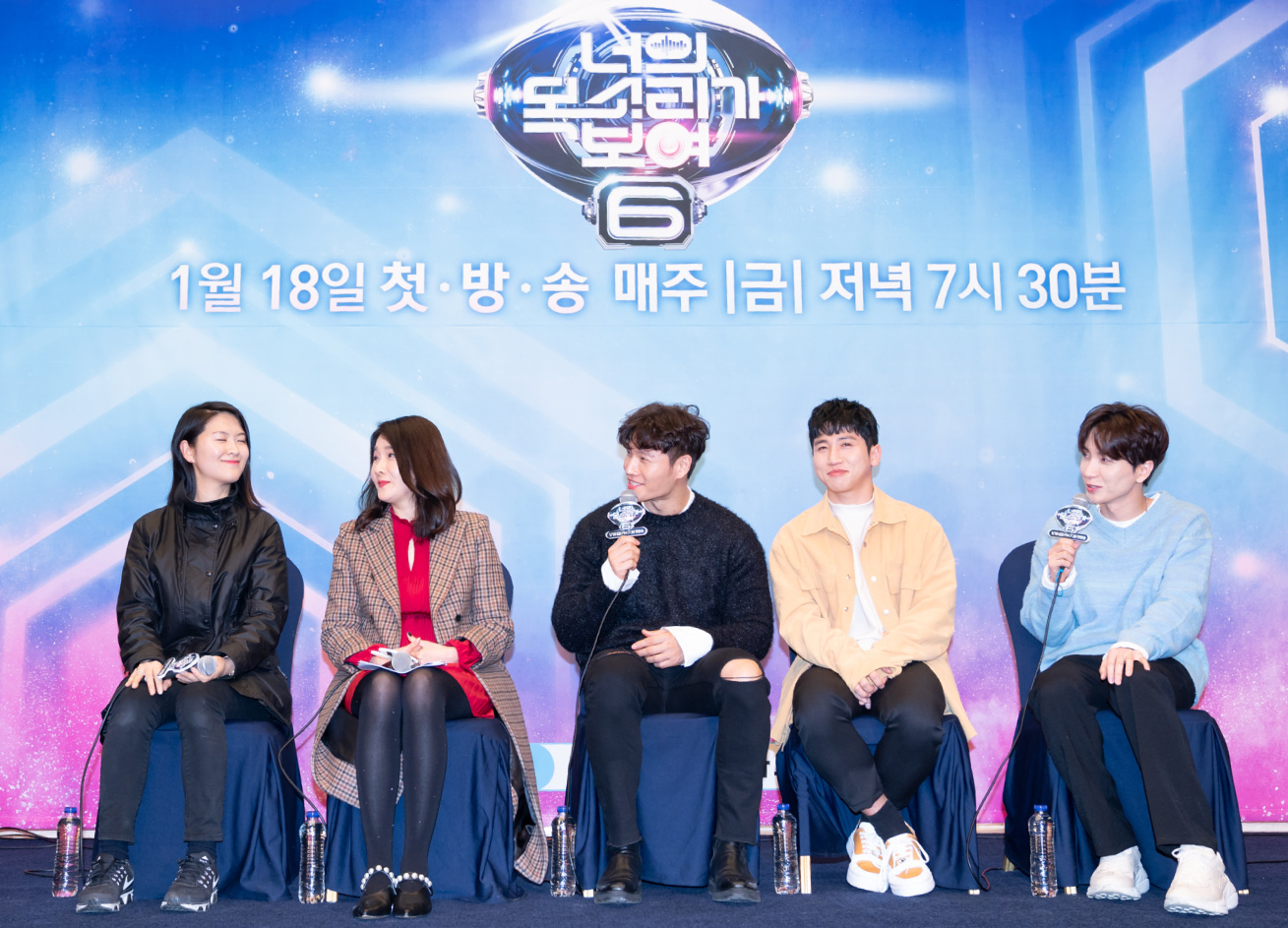 The emcees and producers of Mnet’s music show, “I Can See Your Voice,” talk to local press Wednesday about the sixth season of the show. From left are entertainer Jang Do-yeon, producer Hwang Na-hye, producer Lee Sun-young, and emcees Kim Jong-kook, Yoo Sae-yoon and Leeteuk. [MNET]

Have you ever seen someone for the very first time and imagined what their voice would sound like, and have your expectations ever been completely smashed when they opened their mouth?

Mnet’s music show “I Can See Your Voice” gained popularity by pushing this experiences to the extreme in the winter of 2015, when it invited a popular singer to guess whether the contestants were good or bad at singing judging by their looks or the way they lip-synced to popular songs. The program’s unique format attracted audiences and the first episode of its sixth season is set to air tonight on Mnet and tvN at 7:30 p.m.

In each episode, a famous singer or group judges 10 contestants. There are three rounds: in the first round, singers must eliminate two people purely by guessing whether they think they’re going to be good singers based on their appearance. In the second round, contestants lip-sync along to a song sung by themselves if they’re talented, or a song sung by someone else if they’re bad at singing. In the final round, a panel of celebrities come to the defense of the remaining contestants after having already heard them sing. When the final decision is been made, the guest singer puts on a joint performance with the last one standing, no matter how talented they are.

The season four’s first episode delighted audiences when the final contestant chosen to sing along with singer Kim Jong-kook turned out to have a terrible voice, but took it all in stride and enjoyed herself on stage. Kim joined emcees Leeteuk and Yoo Sae-yoon from then on as one of the show’s hosts.

“I’m honored to be a part of the panel of emcees for the sixth season,” Kim told local press Wednesday. “‘I Can See Your Voice’ has been a bridge that connects a lot of people to their dreams [of becoming singers,] and I’m glad to be a part of it. I look forward to shooting every episode.”

Just as Kim mentioned, “I Can See Your Voice” was crucial in the birth of certain current stars, such as singer Hwang Chi-yeul, actors Lee Sun-bin and Kim Min-gue, all of who were able to step into the spotlight thanks to Mnet. Hwang and Lee will be making an appearance in tonight’s episode along with the 100 other participants who have been featured on previous episodes, to celebrate the beginning of a new chapter. 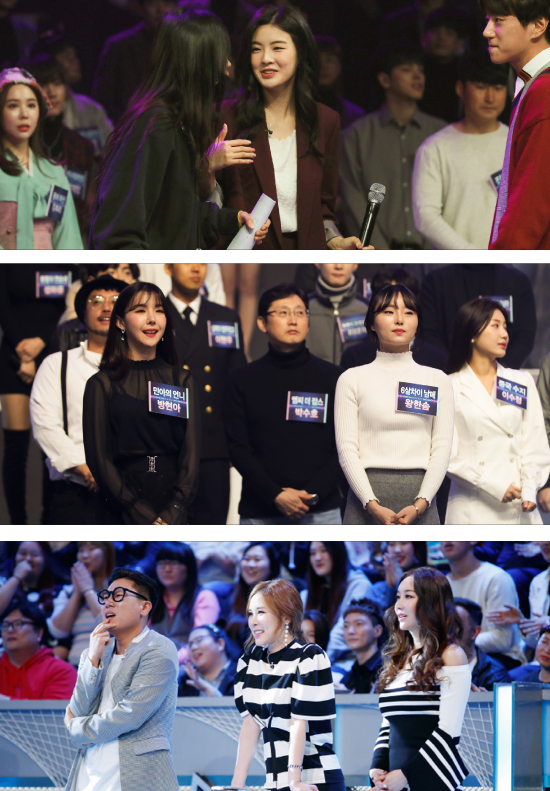 From left: The first episode of the sixth season of “I Can See Your Voice” features actor Lee Sun-bin, center, and singer Hwang Chi-yeul, right; Participants from past seasons come together to sing; The show has new guests every episode, like group Roo’Ra. [ILGAN SPORTS, MNET]

“We’re always amazed at the new people with each episode - there are so many people who are both good and bad at singing,” said Hwang Na-hye, producer of the show. “In the new season, we’ll have the contestants lip-sync not just to people singing well, but to people singing badly as well. It’s going to be more difficult, but also more surprising for everyone to watch and guess.”

Kim added, “I was once a passionate audience member and have now became an emcee of the show. Even though I’m the emcee, I feel like I’m going there to see a new show, not work. And sometimes, I get so involved in guessing whether they will be good singers or not that I forget that I have to lead the show and say what I really feel. The show has been surprising and fun in each and every single episode, and I’m sure that this is what makes ‘I Can See Your Voice’ stand out.”

And just as the members of Wanna One - a boy band formed on the second season of Mnet’s audition program “Produce 101” - Yoo thinks that having other people from Mnet’s other shows might also be fun.

“For instance, we could have people from [singing audition program] ‘Superstar K,’ or from [hip-hop competition show] ‘Show Me The Money’ or the dancing show ‘Dancing Nine.’ We talk a lot about retro these days, and if we have them on the show, we could talk about the good times, their music and what they’re doing these days,” said Yoo.

Whatever new changes are made, Leeteuk, a member of boy band Super Junior and also a successful entertainer, hopes that “I Can See Your Voice” lasts long enough for it to become the next “National Singing Contest,” a music show that’s been running on channel KBS since 1980.

“I thought during the fifth season [of the show] that it was near its end,” said Leeteuk. “But seeing 100 people from the previous seasons come and sing ‘We Are The Champions’ together made me feel like we became one. Hwang Chi-yeul told me that he felt like he was coming back home. Hearing that, I thought that this show could really last long.”

“It’s all thanks to all the participants that we can have a sixth season,” added producer Lee Sun-young. “Just like they have all come back to sing, and just like singer Hwang Chi-yeul found himself at a turning point in his life with the show, there will be people who see changes in their lives both big and small after they have been on this show. And singer Hwang will be revealing his new track for the first time on the show, which is really meaningful, too.”

The first episode will air tonight at 7:30 p.m. on both Mnet and tvN, and will air every Friday night. “Just like Hwang Chi-yeul and Lee Sun-bin, we’re looking forward to new stars being born on our show this season too,” said producer Lee.