Musical fans debate: Sing along or shut up?

Musical fans debate: Sing along or shut up?

Musical audiences are getting crankier than ever. The noise that people’s jackets make when they move slightly in their seats or when they unwrap candy has led to arguments in the middle of recent performances. Critics scribbling notes on pieces of paper during an opening number have been scolded and people coughing have been warned for disrupting others. And if you are caught quietly singing along to one of the musical’s big numbers, expect to get stares from the people sitting around you.

One of the most intense theaters of late is the LG Arts Center, southern Seoul, which has been home to the musical “Matilda” since September. The show, which revolves around a young girl and has many kids in its cast, has drawn many families to the theater. Serious musical fans who want to enjoy every detail of the world-famous show have complained that distracted children have disturbed their experiences, while parents argue that the behavior of young ones is nowhere close to inconveniencing others. These disagreements have come up at a number of musicals that feature casts of young performers, including “Billy Elliot.”

After arguments broke out at some of the musicals’ first few performances, the theater and musical organizers held a series of emergency meetings, coming up with the idea to let audiences know what’s expected of them. Before the start of each performance, an announcement is made, informing the audience that the musical is not specifically made for young audiences and that it is not a piece where big reactions to every scene are welcome. 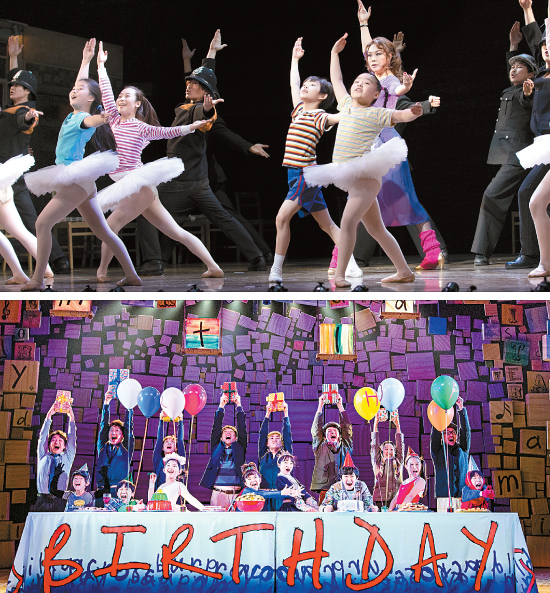 While some musicals that have young performers as lead characters have expanded the audience for musical theater in Korea, they have also had to face conflicts between some serious musicals’ fans who want to give their full focus in serenity and parents whose children may make noise by touching their jackets or asking their parents what’s going on in the scenes they’re watching. [NEWS1]

Even with this announcement, the tension among theatergoers has yet to die down. Theater staff stays alert at all time in case conflicts between audience members break out. 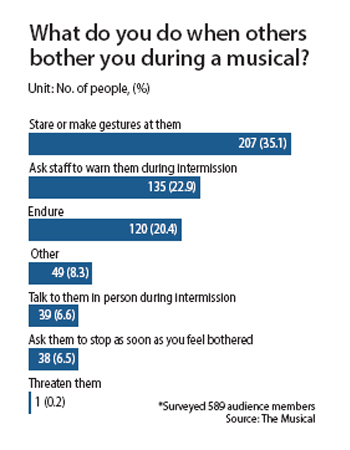 “Superfans get sensitive even to the sound of a kid making a noise from their coats, and moms [fight back] saying [their kids didn’t do anything,]” said Kang Yeon-hee, a manager at the LG Arts Center. “It is important that we respond quickly when any kind of conflict seems to arise, so we are more nervous than ever with more families coming in time for winter break season.”

This new phenomenon has even coined a new word - gwankeu, an acronym in Korean of a phrase, gwangaek critical. “Gwangaek” means audience, and “critical” is jargon often used by Korean gamers after significant damage is done. The word is used to describe a variety of theater behaviors that are bothersome to others.

Online communities for musical fans are filled with posts describing people’s recent uncomfortable theater experiences. One of the behaviors these die-hard musical fans don’t appreciate is sitting slouched to one side instead of straight up. They say that those who sit this way can partially obstruct the view of those sitting behind them. Others have also shared their discomfort over public displays of affection or over those who check their phones during a performance.

At the moment, the only way to enjoy musicals seems to be to not move at all - creating a tense atmosphere in many local theaters. Many people are quite vocal about letting others know their expectations. Some people give warnings in advance to those wearing padded jackets. Others give dirty looks if their seats are touched even lightly from behind.

The bathroom at a theater during intermission is filled with people complaining about “a person behind me coughed so much during the performance,” or saying that “I had to give the stink eye to a mom and her son because they were talking through the first half of the performance.”

The so-called “standard” of what’s considered polite is so strict it doesn’t allow for even the tiniest of movements during a performance. Some musical industry experts have even found themselves being scolded by passionate theater fans. One musical journalist recently drew complaints for taking notes on a paper notepad during a show.

Audiences are even more sensitive at performances held in small theaters, which are usually filled with avid theatergoers. Musical critic Won Jong-won, who is also a professor at Soon Chung Hyang University, was recently scolded by someone sitting next to him while he looked around at the audience to analyze those who came to see the show he was attending.

“I think that person had a prejudice that I, a middle aged man, was someone who had come to see a musical for the first time in his life, and was focused on what I was doing,” said Won. “Performances should be something that people gather to enjoy together, but the audiences these days have gotten more sensitive about watching anything else but the show.”

Korea’s musical industry has rapidly grown since the 2000s. According to the Ministry of Culture, Sports, and Tourism and the Korea Arts Management Service’s survey of the industry in 2018, sales of musical tickets make up more than half of the sales of all performance tickets sold in the country. Musicals made 229.6 billion won ($204.5 million) in ticket sales last year, and nearly 350 billion won in total sales - 35 times more than the 10 billion won the industry made in total sales in the early 2000s.

As the industry has grown, audiences have developed uniquely as well. Most audiences are made up of women in their 20s and 30s, and these avid fans often watch the same performances again and again. “Bungee Jumping of Their Own,” which was staged at the Sejong Center for the Performing Arts, central Seoul, had one person who saw the musical 29 times, and “Darwin Young’s Origin of Evil,” put on by the Seoul Performing Arts Company, had 19 people who saw all nine shows during its run in October.

Ardent fans who pay for such expensive tickets want to ensure they get the most out of their experience because even the same show has different cast members and ad-libs.

“Musical fans can get irritated because watching shows is a crucial part of their lives,” said Kim A-hyeong, communications manager at Seoul Performing Arts Company. “They want to communicate with the cast and give the show all the attention they have in order to catch all the different details from one show to another.”

Another expert said some of these fans have gwankeu behavior to take credit for the success of the industry. “Their pride in helping the musical industry grow comes out in behavior that’s [aggressive] to others,” said cultural critic Han Jeong-ho.

People who have seen musicals overseas often express how difficult it is for Korean audiences to enjoy a show together, just like concerts by pop stars or rock stars. Shows in major hubs of musical theater, like Broadway in New York and the West End in London, usually have a more festive ambience in which the audience cheers and applauds when well-known numbers begin.

One of the positive aspects of gwankeu is that even novice theatergoers are well aware of what to do and what not to do during a performance even on their first visit to a theater. People using cellphones during performances, as well as recording during the middle of a show, were frequently seen even just a few years ago, but that isn’t so common nowadays.

“With social media, [testimonies about bad behavior in theaters] go viral fast and therefore [proper] theater etiquette gets settled just as quickly,” said cultural critic Han, adding that there was a case where someone snuck their pet dog into a theater in the mid-2000s. “As everyone is very sensitive about who follows the rules and who doesn’t, even novice musicalgoers quickly pick up what [to do and what not to do].”

Musical critic Won pointed out that the rise of gwankeu originated from the excessively expensive ticket prices. While the prices of tickets are about the same as musicals elsewhere in the world, Koreans tend to view going to the theater as an especially luxurious experience because the tickets cost significantly more than most other cultural activities.

“There are some political leaders who show their ignorance by saying that musicals are high culture,” said Won, adding that making musicals an “elite art genre” creates the image that people must be silent during the performance.

“Movies and commercials are different even though they both are presented through the same medium, and musicals are not classical music concerts just because they both involve stages for their performances. Musicals should be something more ordinary,” added Won.

He also added that lowering ticket prices could be one way to improve the overall musical industry and make it more appealing to the general public, as well as make it bigger.

Many industry experts agree with the idea that theatergoers need to be more open and embrace others, calling the gwankeu phenomenon a hiccup while performances attempt to attract new fans to make the stagnant theater industry more vibrant. “Matilda,” one of the most discussed musicals at the moment, has also been reviewed positively for its attempt to attract not only those in their 40s and older, but also children and young students who will become the next generation of avid fans.

“It is [an] inevitable growing pain the musical industry has to go through to establish proper audience decorum,” said a representative from Seensee Company, the production company behind “Matilda.”

“There really are obnoxious people in the audience sometimes but an overly sensitive audience doesn’t contribute in making the musical experience healthy,” the company continued, adding that the theater isn’t a study room where absolute silence needs to be observed. It added that musicals are something to be enjoyed together.