‘Gov’t is not aiming for drastic reduction of nuclear power’

‘Gov’t is not aiming for drastic reduction of nuclear power’ 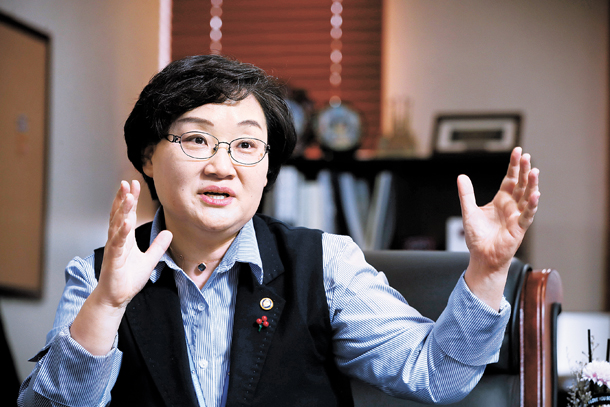 Moon Mi-ok is often called the “king of vice ministers,” since she was a physicist and served as a member of the National Assembly in her 20s and as well as a science and technology adviser to the president.

However, she has received a considerable amount of attacks from supporters of the ruling party, not to mention those from the opposing party.

During the start of the administration, when Pohang University of Science and Technology Prof. Park Seong-jin, a graduate from the same class in college as Moon, was nominated as the minister of Ministry of SMEs and Startups, the Engineers and Scientists for Change (ESC) called for “scientific” level of outlook on science. ESC claimed that Park, who publicly claimed that creationism is in the realm of science, may do research unscientifically.

When Moon was appointed as vice minister, the Union of Public Sector Research and Professional Workers (Kuprp) under the Korean Confederation of Trade Unions (KCTU) said that the appointment was a result of miscommunication between President Moon and the scientists and researchers in the science community.

JoongAng Ilbo conducted an exclusive interview with Moon Mi-ok at the Gwacheon Government Complex in Gyeonggi on Jan. 8. This is her first media interview since she was inaugurated as the science and technology adviser to the president.

Her response was straightforward and the language somewhat rough, like how a powerful vice minister would respond. She refuted the criticisms against her one by one.

Q. Congratulations on becoming vice minister. What do you think about the nickname, “king of vice ministers,” or “minister who has actual power?”

A. It does not make sense (waving her hands). But I think it depends on how you view it. When I was in the National Assembly, I was able to communicate well with the members. The members of the ruling party passionately support me because I was once their fellow member at the National Assembly. This also applies to the relationship with the Blue House or other authorities.

When you were appointed as the vice minister, the Kuprp under KCTU, who you thought were supporters, released a statement opposing your nomination. You must have felt embarrassed.

I interpreted it as a message to frequently meet and listen to them from now on. I cannot even start if I refute the articles of the statement one by one. I invited labor unions that represented [a diverse range of industries]. I will meet them soon.

What do you think about the condemnation that you were the key figure in the chaotic personnel change?

The condemnation comes from those who have a lack of understanding of the system of changes in personnel. This kind of reshuffle cannot be done by the adviser’s discretion. The committee reviews it. In the case of Park Seong-jin and Park Ki-young, the result was disastrous, but the intention of the reshuffle was not a failure. I thought Park Ki-young was the best person who could revive the Science, Technology and Innovation Office, which was established during the Roh administration but later vanished, in a short period of time.

Prof. Park Seong-jin also had excellent capacity in venture business policy. I regret that I did not carefully take the opinion of the public into consideration, other than the capacity of the candidates. When it comes to the head of the government-funded research institutes, most of them finished their term after being appointed by the former administration and resigned.

When the president of KAIST, Shin Sung-chul, was accused by the Ministry of Science and ICT, the minister also said that “it is out of my league.” Doesn’t this mean that the Blue House intervened? Since the start of the current administration, rumors about pressure to resign circulated.

That kind of mindset is a political maneuver. When the minister said that, it meant that the prosecution will handle it. The rumor is false as well. If the resignation was called for a political reason, it should have ended in 2017. President Shin’s case started as the inspector general under the Ministry of Science and ICT audited Daegu Gyeongbuk Institute of Science & Technology (DGIST). It is now under the prosecution’s hands, so it will be done according to the procedures. I was not even aware of Shin’s case and did not intervene.

The science community keeps on complaining that the Moon Jae-in government is not interested in science and technology.

That is not true. The Moon administration is more interested in science and technology than any other administration. The government revived the Science, Technology and Innovation Office and made the chief of the office participate in cabinet meetings. Not only that, the budget on research and development of the government exceeded 20 trillion won ($17.8 billion) for the first time this year. We will actively communicate with not only the researchers but also the public from now on.

It is not solely the problem of this administration, but many express criticism that the government is not finding its own driving force and losing its competence despite the tremendous research and development budget. Shipbuilding, automobiles and smartphones are losing their competitive edge, and some are saying that the semiconductor industry will collapse in a few years.

It is true that we are going through a tough time. We do not have a distinct driving force in our hands. However, there are fields that are performing quite well. The driving forces include 13 fields such as hydrogen economy and artificial intelligence. We will consistently support this field.

Intervals of time exist between fostering talent and developing a technology. It means that we need time to accumulate. I believe if the culture changes to a human and researcher-oriented culture, achievements will definitely be made.

You have been leading the phase-out of nuclear power, which is one of the pledges of President Moon. This is also controversial.

It is true that [I have discussed] the presidential election nuclear power phase-out stories before and after they came out, but it was merely a political slogan. [The discussions were] used before it was revised as a term related to policy. Since it caused unnecessary misunderstanding, it was naïve and immoderate. The government is not throwing away nuclear power but facilitating energy transition where nuclear power will be gradually reduced. The government is not aiming for the drastic reduction of nuclear power such as in the case with Germany or Taiwan.