LEE DONG-HYUN
The author is a deputy industrial news editor of the JoongAng Ilbo. 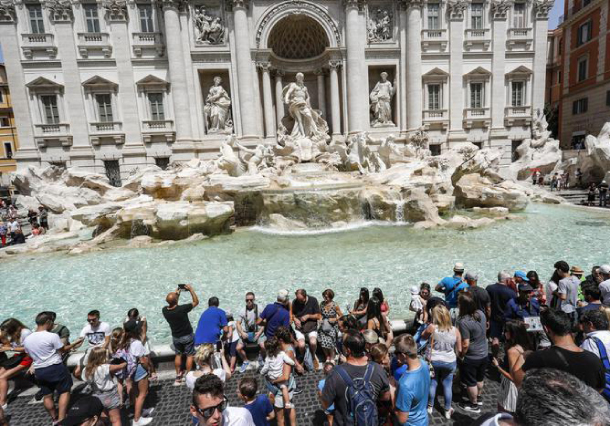 The Trevi Fountain in Rome. [YONHAP]

Fountains were originally devised for functional reasons. They provide water to people. The oldest surviving remains of a fountain are from the ancient Sumerians in modern-day Iraq circa 2000 B.C. Water was collected in a large stone plate. As the water was delivered using gravity, a reservoir had to be in a higher position than the fountain.

Ancient Romans also developed fountains. Water from far away was diverted via aqueducts and was used for irrigation and daily use.
It also used gravity, but the technique of bringing water from far away became more sophisticated. Roman fountains also had aesthetic values, with sculptures of various animal heads that spout water from their mouths.

The oldest fraction was first confirmed in a mathematical document from ancient Egypt. In 1858, Scottish antiquarian Alexander Henry Rhind purchased the papyrus in Luxor, Egypt. It was a mathematical transcription on arithmetic, algebra and geometry by ancient Egyptian scribe Ahmed around 1700 B.C. It is in the British Museum today. It is called the Rhind Mathematical Papyrus, or Ahmed Papyrus.

The discovery of a fraction, which is smaller than one, dramatically improved measuring and calculation capacity of the humanity. It made possible the distribution of limited resources to multiple people and recording amounts. As the production capability of mankind increased, distribution came to have political and social significance. Humanity repeated wars, revolutions and rebellions over who has the right to divide and how to divide.

Both fountains and fractions were devised and developed for the happiness of mankind. Increased happiness means progress while decreased happiness means retrogression. The same applies to the role of journalists. Fortunately, I had the chance to write a piece for the “Fountain” section of the JoongAng Ilbo five times. The first “Fountain” on the second page of the inaugural issue of the JoongAng Ilbo on Sept. 22, 1965, ends with the following quote: “Here we created a humble and small fountain for the people who wish for a place for conversation and rest. Just like the lively fountain that never rests, we want to defy stagnation and decay.”