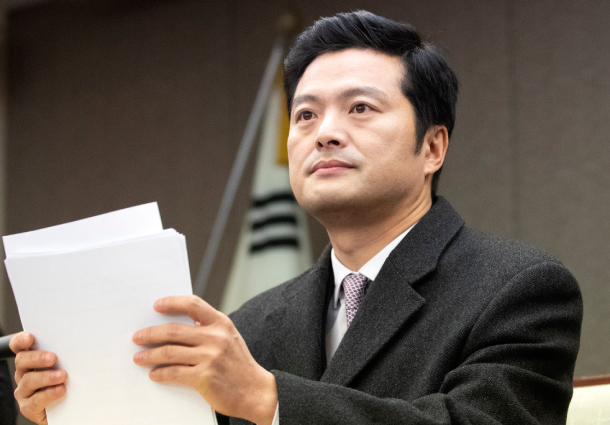 The former Blue House special inspector who accused President Moon Jae-in’s top aides of corruption said Monday in his first press conference that two of his colleagues forged documents to receive travel expenses although they had office jobs, illegally draining tens of millions of won from state coffers.

Kim Tae-woo, the whistle-blower in question, said Moon’s anti-corruption secretary Park Hyoung-chul, who oversaw the special inspection bureau, was aware of the shady transactions, a core reason why he had to take responsibility for the misdeeds. Kim raised the possibility that other Blue House workers could’ve stolen money through similar tactics as well, but did not elaborate further.

Kim surmised that the two employees received about 15 million won ($13,000) each over the 16 months they worked in the Blue House special inspection bureau. Every special inspector who worked mainly outdoors, including himself, said Kim, received 1 million won every month for travel expenses, as well as the monthly 400,000 won they received for “special work.”

The two employees accused of taking that money claimed the expense without leaving the office, according to Kim. Only one of the two suspects was identified by Kim as a high-rank member whose main role was reviewing information Kim and other inspectors collected to decide whether it was worthy of being passed on to higher-level officials, like Park.

In a text message to Blue House correspondents sent hours after the press conference, Park refuted Kim’s accusation and explained that the reviewer needed more special work fees than other members who worked outside the office because he had to “maintain his personal network” during and after work hours. This was necessary for his specific task of supervising the junior ranks, Park argued.

But when a reporter asked why Park was mentioning special work fees when Kim was referring to travel expenses, Park did not answer, as of press time.

Kim’s first press conference lasted 70 minutes, from 10 a.m. Monday at the Korea Press Center in Gwanghwamun Square, central Seoul. Throughout the conference, Kim and his lawyers explained point-by-point how his allegations against the Blue House were true and how the presidential office was lying in its adamant denials.

Kim’s attorney said he and his client decided to convene a press conference to “straighten out” the whirlwind of media reports on Kim and his accusations, but some legal experts believe they did so to give him a better chance of being acknowledged by the Anti-Corruption & Civil Rights Commission as a state-protected whistle-blower. That title could get Kim his job back as an investigator at the Seoul Central District Prosecutors’ Office, from which he was sacked on Jan. 11.

During the press briefing, Kim said Park urged his teammates in the special inspection bureau to work with “loyalty” toward Cho Kuk, presidential senior secretary for civil affairs. Park’s office falls under Cho’s.

The first time the special inspection bureau had an after-work dinner outing, Kim recalled Park telling bureau members that their official toast would include a phrase that went, “For Cho Kuk!” Cho’s name is the same as a Korean word that means “homeland,” but Kim said he got the impression Park was referring to his boss, not the general public.

In the aforementioned text message, Park said he’d never told his underlings to be loyal to Cho.

Kim told reporters that he had more information to reveal, saying that he was waiting for the right moment.