Embattled Sohn has support in Mokpo itself

Embattled Sohn has support in Mokpo itself 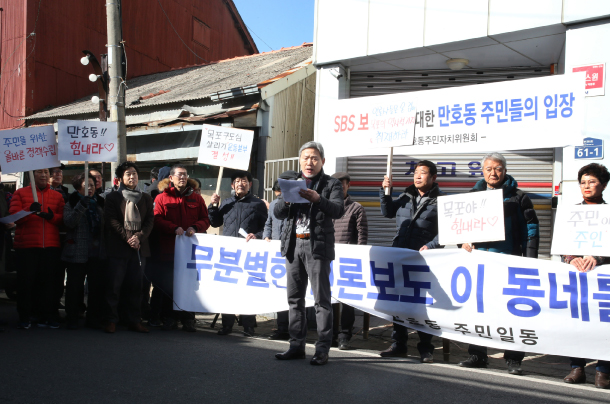 Dozens of merchants from the old district in Mokpo, South Jeolla, stage a rally Monday in support of Rep. Sohn Hye-won, who is under fire for purchases of real estate in the city allegedly made using inside information. [YONHAP]

Dozens of merchants in Mokpo, South Jeolla, rallied Monday in support of a lawmaker whose alleged use of inside information to buy potentially lucrative properties in the city has put her in hot water.

Around 40 shopkeepers running stores in the old city center of Mokpo gathered outside a cafe operated by the niece of Rep. Sohn Hye-won Monday morning and insisted they had “no doubts” about the lawmaker’s claim that she had bought over a dozen buildings in the area to preserve the cultural and historic legacy.

“The old city center has been a long forgotten area,” the group’s spokesman told a JoongAng Ilbo reporter. “Look around. Does it look like a place worthy of real estate speculation like the press claims?”

The old city center of Mokpo is lined with rows of old townhouses and shops that testify to the city’s history as a major commercial hub that thrived under Japanese rule. In 1932, Mokpo was the sixth largest city on the Korean Peninsula, the main port by which Korean cotton was shipped to Japan to feed its textile industry.

This history is what led the Cultural Heritage Administration (CHA) to designate a 114,000-square-meter area in the city’s old center as a “modern history and culture site” last August.

As a member of the legislature’s culture, sports and tourism committee, Sohn allegedly knew this designation would take place before its implementation, and purchased nine buildings in the area between March 2017 and September 2018, according to an SBS News report.

The broadcaster reported that the historic designation increased the buildings’ value, suggesting that Sohn misused inside information.

SBS and other outlets further reported Sohn had allegedly been involved in the purchase of not nine, but up to 22 buildings in the names of her family members and an aide’s relatives. Some of the most recent reports put the total at around 30.

The lawmaker has vehemently battled the allegations and called for a formal probe of the matter Sunday as she announced her exit from the ruling Democratic Party (DP) to shield it from the attacks on her by the opposition.

The main opposition Liberty Korea Party (LKP) led the charge against Sohn and the DP, going so far as to call the case the “Kim Hye-kyo scandal” - using one character from the names of first lady Kim Jung-sook, Sohn and Seo Young-kyo, another DP lawmaker under fire for an influence peddling scandal.

Without citing evidence, LKP floor leader Na Kyung-won claimed Thursday that Sohn had used her personal friendship with the first lady to enrich herself. The two attended high school together.

The minor conservative opposition Bareunmirae Party chimed in Sunday, describing Sohn’s exit from the DP as “stinking of rot” and calling for Sohn’s resignation as a lawmaker.

The issue is also threatening to rupture a tenuous partnership between the ruling DP and the minor opposition Party for Democracy and Peace, whose leading figure, Rep. Park Jie-won - the representative for Mokpo - waged a public feud with Sohn over the issue.

Park had earlier told the press he did not see Sohn’s purchase of the buildings as troublesome, but went back on this statement by calling for an official investigation into her Saturday after it was reported the purchases allegedly numbered in the dozens.

Sohn retorted to this by calling Park “an icon of betrayal,” and saying he should also be subject to a probe for his involvement in the case.

Taking all credit for the allocation of government funds for Mokpo’s revitalization, Park on Monday fought back to call Sohn an “icon of speculation.”