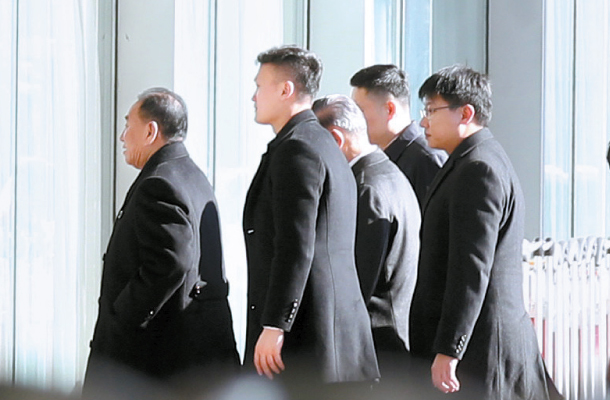 U.S. Secretary of State Mike Pompeo said his administration wants to reduce North Korea’s capacity to build its nuclear and missile development programs and that discussions on that are an “important component” for making sure that both countries deliver on commitments made in Singapore last year.

During an interview with the Sinclair Broadcast Group, transcripts of which were released by the State Department last Friday, Pompeo said that U.S. President Donald Trump has made enormous strides in working with the North to get their commitment to denuclearize and that now was the time “to execute” and “to implement.”

Pompeo didn’t elaborate on how precisely Washington wants to “reduce” the North’s capacity, but the remarks came on the same day The New York Times reported that officials from both countries were currently negotiating a “freeze” of the North’s nuclear fuel and weapons production so that the country’s arsenal doesn’t grow while denuclearization talks drag on.

This could mean that a freeze, which could be interpreted as a short-term goal in getting Pyongyang to denuclearize, would also be discussed when Trump meets North Korean leader Kim Jong-un late next month for their second summit. In their first summit last June in Singapore, both leaders agreed to commit “to work toward complete denuclearization of the Korean Peninsula,” but very little progress - if any - has been made since.

Last Wednesday during a meeting in Washington with U.S. ambassadors and charge d’affaires, U.S. Vice President Mike Pence said that the Trump White House was still awaiting “concrete steps” by the North to dismantle nuclear weapons that threaten its people and allies in the region.

Speaking to “Fox News Sunday,” Pence said Washington will explain to Pyongyang in the second summit what denuclearization steps it was looking for, adding Trump was “very optimistic” about the plan.

In the second summit, said Pence, “We’ll be laying out our expectation for North Korea to take concrete steps to begin to make real the denuclearization that Kim Jong-un committed to.”

On Sunday night in Washington, Trump tweeted that the media wasn’t giving his administration any credit for the “tremendous progress” it made with Pyongyang. “Looking forward to meeting with Chairman Kim at end of February!” he wrote.

In a meeting with his senior secretaries on Monday at the Blue House, South Korean President Moon Jae-in said both North Korea and the United States were “very satisfied” with Trump’s meeting with Kim Yong-chol last Saturday in Washington, and that Trump specifically said significant progress was made in denuclearization and “other issues.” Kim Yong-chol is vice chairman of the North’s ruling Workers’ Party’s Central Committee who traveled to Washington to deliver a letter from Kim Jong-un to Trump. Shortly after the meeting, the White House announced that a second U.S.-North summit was officially set for late February.

In Monday’s meeting, Moon continued that lower-level talks between the two countries were carrying on in Stockholm and that South Korea was participating in the discussions as well. An international conference on denuclearization, hosted by the Swedish Foreign Ministry, is currently being attended by Choe Son-hui, North Korea’s vice foreign minister; Stephen Biegun, the U.S. special representative on North Korea; and Lee Do-hoon, the South Korean Foreign Ministry’s special representative for Korean Peninsula peace and security affairs.