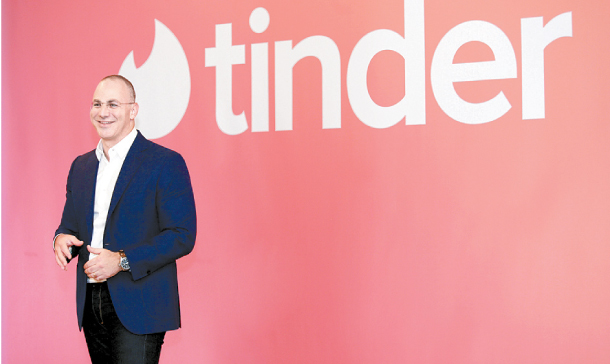 Elie Seidman, CEO of Tinder, speaks at a press conference in central Seoul on Tuesday. [TINDER]

Korea is the test bed for Tinder services in the rest of Asia, the dating app’s CEO said during his first press conference in the country on Tuesday.

“South Korea is an important market for us because of the market itself, but also because of the cultural influence it has over the broader Asia region,” said Tinder CEO Elie Seidman. Seidman previously served as the CEO of OkCupid, another popular American dating service.

“Not only do most Koreans have smartphones and use social media, but the country wields a lot of influence in Asia through K-pop and the Korean wave.”

Korea’s potential to raise the brand awareness of Tinder across Asia has already been demonstrated, according to the app’s regional director.

“We once worked together with Korean celebrities Kim Jong-kook and Haha to have them use Tinder during a trip in Vietnam” for a reality TV show, said Lyla Seo, regional director, East Asia. “We saw a huge surge in Tinder users in Vietnam following the program.”

Seo, who is Korean, oversees the dating service’s business in Korea, Japan and Indonesia. Seo worked as a marketing manager for Google Korea before joining Tinder.

“Tinder has the so-called passport service, which allows people to view and match with users from other countries. The top five countries that used the passport to meet Koreans were Singapore, Japan, Thailand, Indonesia and Malaysia, reflecting the popularity of Korean culture,” she added.

In Korea, the dating app first launched in 2015 and has been growing rapidly since. Tinder in Korea reported over 2.5 times more downloads last year compared to 2016. The service is especially popular among women, and over 80 percent of the users here are millennials.

According to Tinder, the three biggest reasons Koreans use the app are to meet new types of people from different backgrounds, find users with similar hobbies and meet users in the same area.

Users in Korea are most active on the app around 10 p.m. on Monday after they come back from work or school, Tinder also said.

Tinder’s plan in Korea this year is to draw in more college-aged students and promote the idea that the app can be used to meet friends under the “Find a friend on Tinder” campaign.

“In Korea, we are planning to introduce more marketing activities targeting college students and contribute to society by launching a scholarship program,” Seo said.

Tinder, founded in 2012, has around 4.1 million paying users and generated $800 million in revenue last year worldwide.