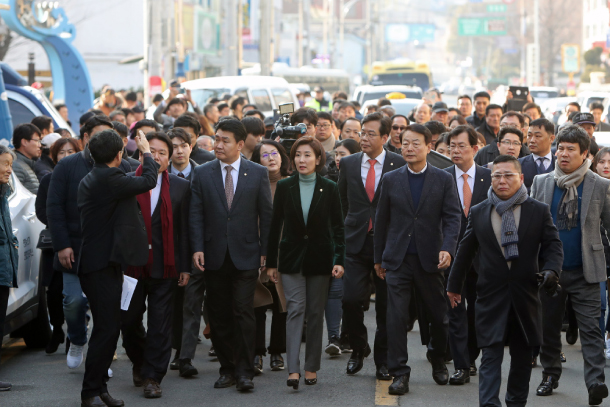 Opposition lawmakers visited Mokpo, South Jeolla, Tuesday to look into allegations that Rep. Sohn Hye-won, a lawmaker who quit the ruling party last week, used inside information to buy up properties in a historic district.

Several lawmakers from the main opposition Liberty Korea Party (LKP) took a train to Mokpo Tuesday afternoon. The trip was part of the party’s probe into allegations that Sohn bought up to 30 buildings in the old city center of Mokpo after hearing the area would be designated a “modern history and culture site” by the Cultural Heritage Administration (CHA), which boosted property values.

Earlier that day, LKP floor leader Na Kyoung-won delivered a bombshell warning at a morning party meeting at the National Assembly. She said the LKP was mulling a boycott of legislative proceedings next month if the ruling Democratic Party (DP) continues to circle the wagons around Sohn by rejecting the opposition’s calls for a parliamentary hearing and special counsel investigation into the scandal.

“It is public knowledge that never before has a party become so riled up as to whitewash a first-term lawmaker’s corruption,” said Na.

The last time the LKP boycotted legislative proceedings last November, the National Assembly almost missed its deadline to approve the government’s budget for this year.

After arriving at Mokpo, Na and the LKP lawmakers visited the city government’s headquarters. There they dressed down provincial officials and CHA employees about Sohn’s scandal after they were briefed about the current state of the renovation initiatives that the city is pursuing.

Without citing a source, Na claimed that 28 percent of the area designated as a culture site by the CHA in Mokpo’s old city center belonged to people from outside of the city, with 18 percent of that owned by Sohn’s family.

Another LKP lawmaker chimed in and claimed Sohn was “crazy for money rather than being crazy for culture.”

Mokpo’s mayor, Kim Jong-sik of the DP, told lawmakers the “people are concerned” over the recent scandal, and that he hoped the LKP would help the city’s cultural initiatives proceed without issues.

This meeting was then followed by a trip to areas in the old city center that are under renovation as part of the cultural initiative.

While Na said the LKP’s trip to Mokpo was aimed at uncovering the truth behind Sohn’s alleged real estate speculation, some analysts said that the move was mostly a public relations stunt meant to underscore the LKP’s leadership in the campaign against the DP and the Moon Jae-in administration over Sohn’s scandal.

Even in the DP, which has remained silent as the opposition calls for official investigations, a growing number of its representatives feel that Sohn crossed the line.

On a current events program on MBC Monday, DP Rep. Keum Tae-sup called the allegation that Sohn pressured the CHA to buy art commissioned by herself as a “conflict of interest.” Sohn posted on the internet Tuesday that Keum was using “fake news” without consulting her beforehand.

Despite her fierce resistance, the cards look increasingly stacked against the rogue lawmaker. Sohn quit the DP Sunday, vowing to return only after clearing her name.

In a meeting with the DP chairman and Blue House policy chief Tuesday, Prime Minister Lee Nak-yon delivered the government’s first active response to the allegation. Lee said that any wrongdoing, if found, would be “dealt with according to the law.”