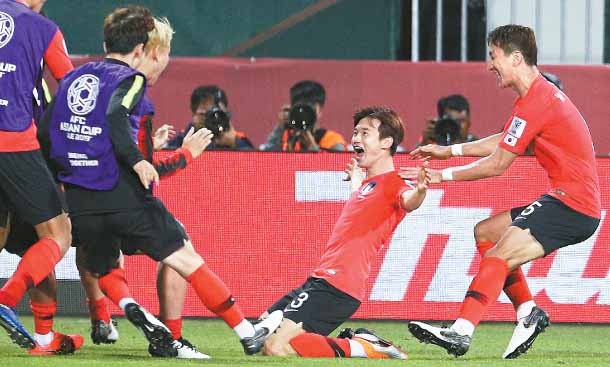 Kim Jin-su celebrates with his teammates after heading in the winning goal in extra time during Korea’s round of 16 match against Bahrain at Al-Rashid Stadium in Dubai, the United Arab Emirates (UAE), Tuesday. [NEWS1]

It wasn’t fun and it wasn’t pretty, but Korea finally beat Bahrain 2-1 in extra time to progress to the quarterfinals at the Asian Football Confederation (AFC) Asian Cup Tuesday.

In what was expected to be an easy match against 113th-ranked Bahrain, Korea struggled to create opportunities for most of the first half at Al-Rashid Stadium in Dubai, the United Arab Emirates (UAE). In fact, it was Bahrain that had the match’s first three shots in the opening moments, including Mohamed Marhoon’s volley from the top of the box after a quick transition.

Korea predictably enjoyed a substantial edge in ball possession, but barely -tested Sayed Shubbar Alawi in the Bahrain net early on. Bahrain played Korea straight up and created some decent looks on net, rather than sitting back on defense and crowding their own box.

Hwang Hee-chan, assisted by Lee Yong, opened the scoring in the 43rd minute to give the Taeguk Warriors the lead going into the half time break.

It was Korea’s first shot on target in the match.

Korea seemed to lose focus in the second half, struggling to keep control of the ball and allowing Bahrain to creep steadily closer to the goal. The absence of veteran midfielder Ki Sung-yueng took a toll on the team, with misplaced passes falling at opposing feet far more regularly than in previous games.

The KFA announced Sunday that Ki has been dropped from the team due to a nagging right leg injury he sustained during Korea’s first Group C match against the Philippines on Jan. 7.

With the defense in front of him struggling to clear loose balls, goalkeeper Kim Seung-gyu stepped up with his best save of the match in the 70th, punching out Jamal Rashed’s curling shot from the right edge of the box to preserve a 1-0 advantage.

With less than 15 minutes left on the clock, Korea paid the price for its lack of control - Bahrain’s Mohamed Al Romaihi scored an equalizer in the 76th minute.

Al Romaihi was the first player to score against Korea in any of its Asian Cup games this year. Korea has only conceded a goal in one other Asian Cup game since 2011 - the 2015 final where it lost the title 2-1 against Australia.

Although Lee breathed new energy into Korea’s predictable offense, he failed to find the back of the net and the Taeguk Warrior’s first knockout match of the tournament was forced into extra time.

Korea finally pulled ahead at the end of the first half of extra time, with Kim Jin-su heading a cross from Lee Yong home in the 107th minute.

Jeonbuk Hyundai Motors FC defender Kim Jin-su was brought on as a substitute for Hong Chul in the 96th minute. He scored the first goal of his 37 appearances for the senior national team.

Bahrain tried in vain to fight back, but Korea hung on for the hard-fought win.

“It was a tough game. We played against a team who packed the defense and played counter-attack, so it’s not easy,” captain Son was quoted as saying after the game by AFP. “It’s all about attitude as well, and I’m a bit unhappy with our performance. I think we’re better than that.”

Although Korea had its back against the wall in the second half, it still enjoyed the majority of the possession, controlling the ball for 71 percent of the match. The Taeguk Warriors had 16 shots to Bahrain’s 17, but only two - the two goals - were actually on target. Bahrain tested the keeper four times but only scored once.

It was a messy game, with a total of 29 fouls - 11 from Korea and 18 from Bahrain. The lower-ranked team also took two yellow cards while Korea once again avoided being booked.

Although he was tested Tuesday, Bento maintains his undefeated streak with the Korean team. In 11 games, Bento’s boys have taken eight wins and three draws since the new coach took over in August last year. With four wins at the Asian Cup, Bento and the team are now one step closer to winning the Asian Cup for the first time since 1960.

With a win, Korea will face Qatar in the quarterfinals at 10 p.m. on Friday.

Korea has posted five wins, two draws and two losses against the 2022 World Cup hosts, losing its most recent meeting by 3-2 during the 2018 World Cup qualifying campaign in June 2017.

Qatar, currently ranked at No. 93 to Korea’s No. 53, could also prove a challenge tomorrow. Qatar beat higher-ranked teams No. 69 Saudi Arabia, No. 81 Lebanon and No. 88 Iraq, in its journey to the semifinals, suggesting that Korea’s statistical advantage may not give it that much of an edge.