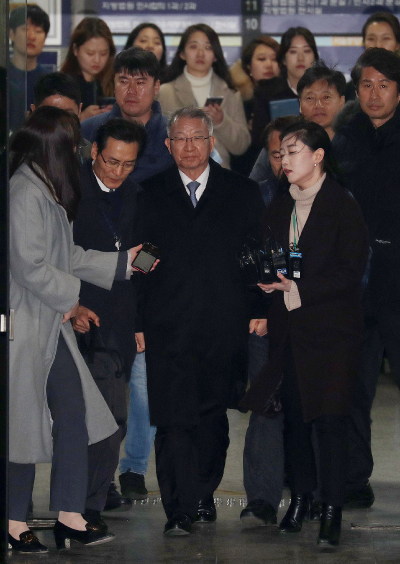 Former Supreme Court Chief Justice Yang Sung-tae, center, walks out of the Seoul Central District Court on Wednesday, surrounded by dozens of reporters, after attending a hearing about the issuing of an arrest warrant against him. [NEWS1]

Former Supreme Court Chief Justice Yang Sung-tae attended a final hearing Wednesday before a Seoul court decides on whether to issue a warrant for his arrest by early this morning.

If the court grants the warrant, it will be the first time in Korean history that a former head of the Supreme Court - who is also in charge of the entire judiciary - is detained on criminal charges.

A reticent Yang and his attorney walked past dozens of reporters and flashing cameras into the Seoul Central District Court Wednesday morning, where he faced five and a half hours of questioning, with a break, before emerging at around 4 p.m.

The former chief justice then made his way to the Seoul Detention Center, where he awaited the court’s decision, which was expected late Wednesday evening or early this morning, both beyond press time.

Yang has been accused of abusing his authority over the country’s judiciary as head of the Supreme Court from 2011 to 2017. By ordering subordinates to tamper with ongoing trials, he has been accused of eroding the judiciary’s independence and the constitutional principle of the separation of powers, as many of the trials were allegedly meddled in to curry favor with the Park Geun-hye administration.

The most serious allegation against Yang is that he delayed proceedings in two suits filed by Korean victims against Japanese companies that forced them to work during World War II. The Park administration didn’t want the diplomatic headache that verdicts for the plaintiffs would have caused, and Yang allegedly tried to prevent those. The two cases were delayed by four years.

On Friday, prosecutors followed up on months of investigations into the allegations by filing for an arrest warrant with the Seoul Central District Court, saying that Yang had evaded responsibility and consistently placed blame on his former subordinates when authorities questioned him.

While the prosecution has yet to issue a formal indictment against Yang, investigators said his detention would eliminate the likelihood that Yang would attempt to tamper with evidence of alleged crimes, which reportedly could result in around 40 charges.

Since investigations into the allegations began in June last year, an embattled Yang cast himself as the defender of judicial independence in his brief contacts with the press, denying that he had ever meddled with “sacred” trial processes.

Yang spent an unprecedented 36 hours on Jan. 16 and 17 studying the prosecution’s official investigative report from two rounds of questioning undertaken days earlier. Legal analysts said that Yang used this time to become fully acquainted with every detail in the investigation and devise the strategy he would undertake in the warrant hearing that began yesterday.

All eyes are now on the judge presiding over Yang’s hearing, Myeong Jae-kwon, a former prosecutor who is Yang’s junior by over 20 years. Myeong has no direct ties to the Supreme Court nor its administrative arm - the National Court Administration (NCA) - and has been cited by some analysts as a reasonable choice to undertake this historic decision.

Other have said Myeong’s 12-year experience as a prosecutor from 1997 to 2009 could incline him towards granting the warrant to take down a judicial colossus like Yang.

Legal analysts interpreted Myeong’s appointment as a warrant judge last September as a signal that the judiciary under Chief Justice Kim Myeong-su, Yang’s immediate successor, is trying to placate prosecutors after a judge turned down requests by prosecutors to conduct a raid on an ex-Supreme Court justice allegedly tied to Yang.

But it is also possible that Yang escapes immediate arrest, at least for the time being.

Prosecutors have tried to arrest two of his deputies also accused being involved in many of the same alleged crimes, former Supreme Court Justices Park Byoung-dae, and Ko Young-han, last month. The warrants were denied.

Either way, given the plethora of evidence prosecutors have at their disposal - which include compelling testimonies from Lim Jong-hun, a deputy at the NCA who allegedly carried out much of Yang’s dirty work - indictments will certainly take place.