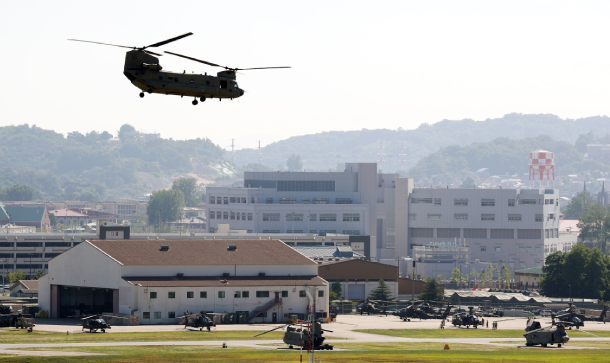 The largest U.S. overseas military base, which is in Pyeongtaek, Gyeonggi. [NEWS1]

Washington is pushing Seoul to pay at least $1 billion annually to host American troops in South Korea - and threatening to withdraw U.S. forces if it refuses.

According to a local source with knowledge of the ongoing negotiations, who exclusively spoke with the JoongAng Ilbo, a U.S. government official relayed the offer to South Korea last week and said Washington will never allow Seoul’s payment to fall below a 10-digit figure.

Seoul paid around 960.2 billion won ($852 million) last year, which is known to be about half the total expenses for stationing U.S. forces here. (In other words, both countries roughly paid the same amount).

Washington’s proposal was part of negotiations to renew the bilateral Special Measures Agreement (SMA), a multiyear cost-sharing deal under the Status of Forces Agreement, or SOFA, to maintain the 28,500 American troops that make up the U.S. Forces Korea. The two countries have been discussing the renewal since March 2018 as the current deal expired at the end of last year. Even after 10 rounds of talks last year, the two sides failed to narrow their differences and agreed to continue negotiations.

Seoul officials have refused to pay the United States more than 1 trillion won. Washington’s demand of $1 billion is about 1.1 trillion won.

According to the local source, the U.S. government official said it was U.S. President Donald Trump’s stance that “Either they [South Korea] pay or we pull out.” The American official continued that there would be no room for negotiation on the $1 billion-or-above offer, the source said.

It is not known how Seoul replied to this ultimatum.

Washington has also asked for the deal to be renewed yearly, but Seoul asked for three-year deals.

Trump has pressed U.S. allies around the world to pay more for defense costs and repeatedly said that Washington will renegotiate terms so that his country will be treated “fairly.”

After his first summit with North Korean leader Kim Jong-un last June in Singapore, Trump cited the “tremendously expensive” cost of joint military exercises with South Korea when he said he would end the two countries’ “war games” during a press conference with international reporters. South Korea, he added, wasn’t contributing 100 percent of the “incredible” amount of money spent on them.

Concerning American troops in the South, Trump said, “I want to get our soldiers out. I want to bring our soldiers back home,” but added in the same breath, “That’s not part of the equation. At some point, I hope it would be.”

Another source in South Korea feared that Trump may try to bring up that issue with Kim in late February when they meet for their second summit, in light of the fact that Pyongyang has been pressing Washington to provide reciprocal measures for its “goodwill gestures” related to denuclearization.

If South Korean President Moon Jae-in gave any hint of a possible withdrawal during his New Year’s press conference on Jan. 10, it was that the U.S. troops would remain - for the time being.

“The issue of American troops in South Korea is not related to the process of denuclearization,” said Moon, adding that they were here on the basis on the Seoul-Washington alliance.