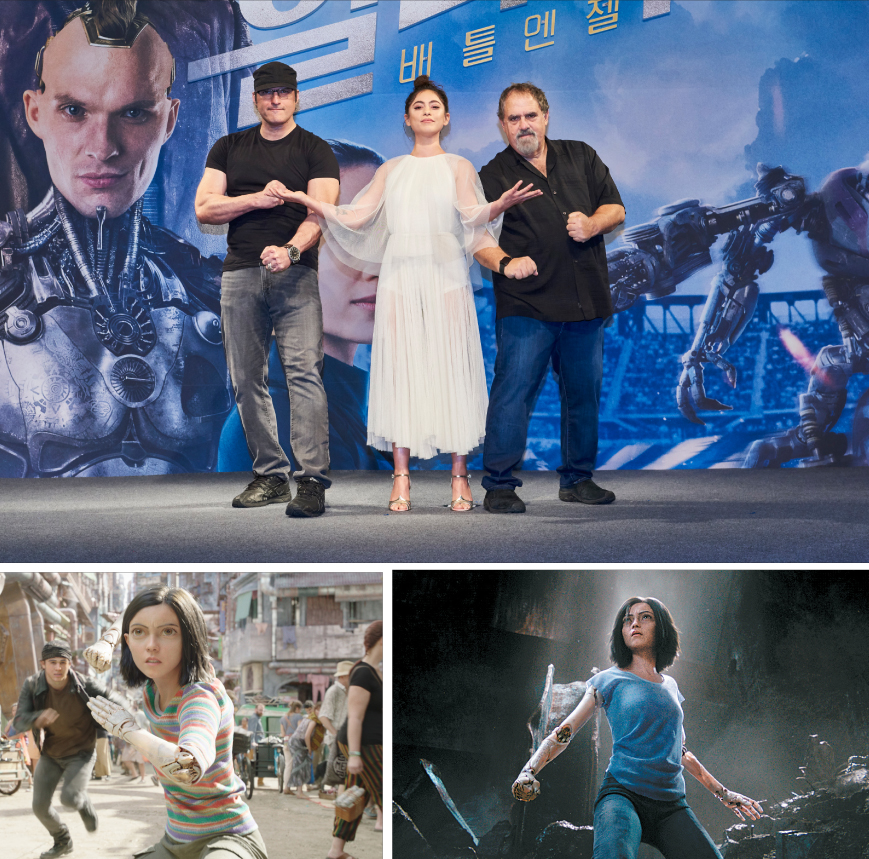 The high profile names behind the visually stunning “Alita: Battle Angel” offers moviegoers a reason to watch the upcoming action-packed title. But there are a lot more interesting elements in the film that could hook audience members to look forward to the release of the big-budget anime adaptation, slated for arrival in theaters next month. After all, the movie comes following the 20 years of making, according to its director Robert Rodiguez, who attended a press event in Yeouido, western Seoul, on Thursday.

Coming from visionary filmmakers James Cameron of the “Avatar” (2009) and Rodiguez of the “Sin City” franchise, the blockbuster feature is a cyberpunk action film based on Yukito Kishiro’s manga series “Gunm,” which translates in Japanese as gun dream. The screenplay was written by Cameron and Laeta Kalogridis.

Taking several centuries into the technological dystopian future, “Alita,” produced by Cameron along with Jon Landau, revolves around a strangely big-eyed amnesiac cyborg named Alita, played marvelously by Rosa Salazar, who is rescued from a scrap heap and nursed back to health by a doctor (Christoph Waltz) that tries to help the girl remember her past. Realizing of her warrior spirit, the girl joins to become a bounty hunter in track of criminals.

Telling a very human story through the eyes of the cyborg, who goes through emotional experiences like falling in love and discovering who she is throughout the two-hour adventure, “Alita” is a dream come true for both the director and Cameron, who initially planned to direct the movie 20 years ago after falling in love with the manga.

“I was thrilled to get to work on this movie,” said Rodiguez. “It’s been a dream project for me because it’s a movie that I really wanted to see… When I found out he [Cameron] wasn’t going to have time to make it, I really wanted to be part of it so I could watch it too.”

The area that Rodriguez put most attention on for “Alita” was sticking with the script that Cameron had written. Describing it “so well-realized,” Rodiguez explained that what he did as a director for “Alita” was to “make it close to what he [Cameron] wrote as much as possible.”

“He makes movies that appeal to all over the world. Finding that magic that was already in the script and getting that out. That was the main part of the job [as a filmmaker],” he said.

The director also tried to incorporate as much as possible - from costumes to visual styles - from the original manga to the big screen.

“I love bringing pages to life. It’s very exciting from a fan’s point of view.”

Landau further explained that diverging from the original material was not necessary, since the story aligned with their goal to appeal to global audience. And partly changing the names of some characters while sticking with the visual style was one of the approaches they took.

“It’s not specifically set in Asia. That gave us a lot of latitude to create names that global audience throughout the world could relate to.”

Pulling off motion capture performance was definitely a new experience for Salazar, but nothing unpleasant.

It was “a perfect marriage of acting and technology,” Salazar told the Korean press. “For me it was a bea utiful thing [to play Alita]. As an actress you want to create a new character, and this was an opportunity to literally bring someone new to life into the world.” She added, “It allowed me to become someone completely new.

“There are few movies every year that you have to see on big screens,” said Landau. “’Alita’ is one of them.’”

Rated 12 and above, the upcoming title, which the director has a lot more to tell hopefully through sequels, is scheduled to arrive in theaters on Feb. 5.