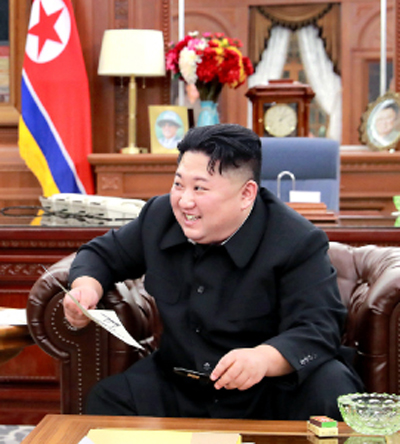 North Korean leader Kim Jong-un holds a letter from U.S. President Donald Trump in his office Wednesday. Trump’s signature is seen at the bottom of the letter. [KCNA]

North Korea’s official Korean Central News Agency (KCNA) did not elaborate on the letter’s content or the preparation “tasks” Kim relayed, but said he was pleased with the outcome of a visit to the White House last week by a North Korean delegation. Those remarks were made Wednesday as members of the delegation briefed Kim about their discussions with Trump last Saturday and delivered a letter from the U.S. president to Kim.

Kim Yong-chol, vice chairman of the ruling Workers’ Party’s Central Committee, led a delegation of about 10 officials to Washington to meet with White House officials and hand-deliver a letter to Trump by Kim Jong-un. The content of that letter hasn’t been revealed by either country yet, but the White House announced later the same day that a second U.S.-North summit will be held in late February.

In Wednesday’s meeting between Kim Jong-un and the delegates, the North Korean leader was quoted as speaking highly of Trump for “expressing his unusual determination and will for the settlement of the issue with a great interest in the second DPRK-U.S. summit.” But it was unclear whether that remark was a direct response to Trump’s letter.

In an English version of the KCNA report, Kim Jong-un said his country “will believe in the positive way of thinking of President Trump, wait with patience and in good faith, and, together with the United States, advance step by step toward the goal to be reached” by the two countries.

Pyongyang’s announcement that a North Korean delegation visited Washington to meet Trump was a far cry from the last visit in June, when North Korea’s media did not mention it at all.

That previous delegation was also led by Kim Yong-chol, who met Trump in the White House and delivered a letter from Kim Jong-un, which paved the way for the historic first summit between the two countries.

The fact that the regime mentioned a second summit now, weeks before its planned date, is also contrary to the first summit. North Korean media revealed the plan for a meeting between the leaders less than a week before it was to be held.

In analyzing these changes, a South Korean government official said it appeared that North Korea was trying to “play offense,” or take a bolder approach than last time, to gain the upper hand at the second summit.