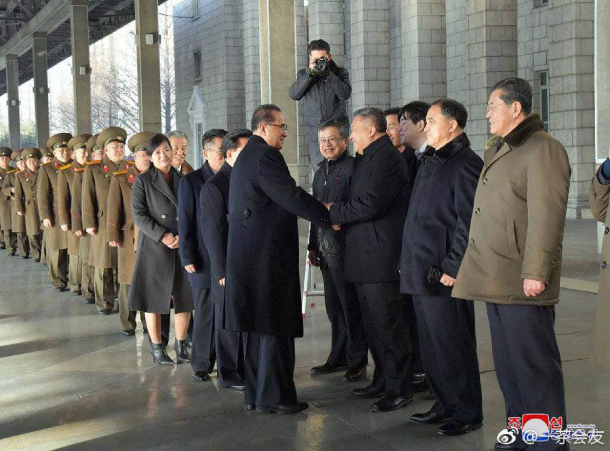 A North Korean delegation of orchestra members and government officials, left, is seen off by senior officials of the ruling Workers’ Party’s Central Committee Wednesday at a train station in Pyongyang before heading to Beijing to hold two friendship concerts. [KCNA]

The delegation is led by Ri Su-yong, vice chairman of the ruling Workers’ Party’s Central Committee, who’s a member of the committee’s Political Bureau.

The delegation is said to be composed of the State Merited Chorus and “leading artistes” in Pyongyang.

Other members of the delegation were not specified in the KCNA article, but a photo released by the agency showed Hyon Song-wol, who led the Samjiyon Orchestra last year to South Korea, in the group.

The Samjiyon Orchestra held two concerts in South Korea before the PyeongChang Winter Olympic Games just as detente between the two Koreas began.

When the North Korean delegation of about 280 people arrived in Beijing Thursday at around 11 a.m. by train, a red carpet was rolled out at the Beijing Station and Chinese officials were seen greeting them.

According to Beijing sources, the North Korean performers are expected to stage two concerts in the Chinese capital Saturday and Monday at the China National Centre for the Performing Arts. It is not known whether Chinese President Xi Jinping will attend or whether he will meet with North Korean officials on the sidelines.

The friendship concerts come as this year marks the 70th anniversary of bilateral ties between the two communist allies and as Xi is expected to visit Pyongyang some time early this year on the invitation of North Korean leader Kim Jong-un.

The gigs are also a reciprocal gesture after a Chinese troupe of performers visited the North last April and November to stage friendship concerts. Kim attended at least one.

Hyon is known to have been involved in planning the North Korean concerts. When Kim Jong-un visited China from Jan. 7 to 10 - his fourth visit since becoming leader in late 2011 - Hyon accompanied him and discussed the idea of concerts with Chinese officials.

The last time she was seen in Beijing was December 2015 when Hyon led the renowned Moranbong Band to play a series of concerts in China.

But what was supposed to showcase warming ties between the two neighboring countries ended up being one of the worst moments in their decades-old alliance when the Moranbong Band decided to cancel all their shows. During a rehearsal, Chinese officials took issue with a backdrop scene that depicted a North Korean long-range ballistic missile launch. They told Hyon to remove it, but she refused and decided to pack her bags and return home.