On Sunday, the Bank of Korea said consumer spending grew 2.8 percent in 2018, expanding at the fastest pace since 2011. The central bank attributed the latest gain to growing sales of new home appliances, such as air purifiers and clothing care dressers, as well as imported cars.

The higher intensity of fine-dust particles last year led to the increase in sales of air purifiers. Foreign carmakers’ promotional events in early 2018, ahead of strengthened government regulations on emissions, pushed up sales of imported cars. Spending on durable goods - items such as televisions or cars that are expected to last a long time and are bought infrequently - rose 6.2 percent over a year ago.

The Bank of Korea added that purchases of clothes and cosmetics also contributed to the rise in private consumer spending. 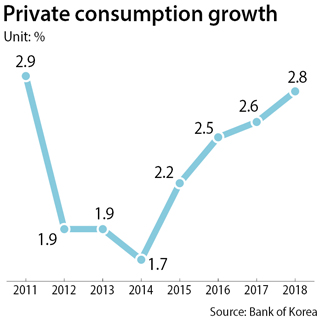 The increased spending also appears to be driven by rising household incomes and last year’s double-digit hike to the minimum wage. Nominal wages jumped 7.9 percent in the first quarter of 2018 compared to the same period last year and maintained a fair growth at 4.2 percent in the second quarter. The rate edged down in the third quarter to 2.9 percent. Still, the annual average rate will likely surpass that of the previous years. Nominal wages went up 3.8 percent in 2017 and 3.3 percent in 2016.

It is the first time in 13 years that the growth of consumer spending exceeded that of the gross domestic product (GDP), as consumers have kept their wallets tight in recent years. The country’s economy expanded 2.7 percent last year. Consumer spending growth dipped below the 2 percent mark between 2012 and 2014 and remained moderate at 2.2 percent in 2015. Disastrous events, such as the sinking of the Sewol ferry in 2014 and the Middle East respiratory syndrome outbreak in 2015, caused the lower spending.

Alongside government spending and robust exports, the healthy consumption growth also contributed to this year’s growth amid lagging trends in industrial and construction investment.

Still, the central bank expects spending growth to shrink this year in the face of tougher economic conditions. It projected consumer spending will grow 2.6 percent, down 0.2 percentage points from 2018.

The projection came with the central bank’s revision of this year’s economic growth from 2.7 percent to 2.6 percent earlier this month. The bank cited a slowdown of global trade and tensions including the U.S.-China trade dispute and Brexit.