Return of the emperor

Return of the emperor 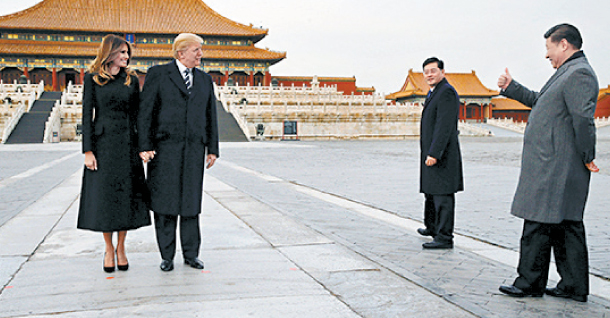 “We call ourselves descendants of the dragon,” said Chinese President Xi Jinping at Beijing’s Forbidden City on November 8, 2017. China believes in feng shui. The spirit of the land follows the dragon’s veins. It starts from Kunlun and continues through Qinling mountains. Xian, the capital of the Han and Tang dynasties, is on the axis.

From the beginning of the year, the dragon vein was stirred. CCTV aired a 43-minute documentary titled “Eradication of Illegal Villas in Qinling” on January 9. It was about the demolition of more than 1,000 mountainside villas.

It investigated the thoughtless development that damaged the dragon’s veins and consequent political scandal to advocate punishing loose and nominal bureaucracy in the region. Shaanxi Province was turned upside down as it destroyed the dragon’s vein and ignored Xi’s orders six times. The former secretary of Xian was sentenced to life in prison, and Shaanxi Province’s former party secretary Zhao Zhengyong was arrested for unidentified charges. More than 1,000 people are under investigation.

The Qinling incident reflects Xi’s absolute power. After CCTV’s 2014 exposure of the development in Qinling. Xi made his first order. When it was first built, the mountains were high, and the emperor was far away. An investigation team was set up more than 20 years later, and a retired official headed the team. A report that 202 illegal villas were demolished and forfeited was submitted. But it turned out to be fabricated. Xi repeated the order, but the team was still half-hearted about the investigation. In July 2018, Xi sent an undercover emissary. Deputy Secretary of the Central Commission for Discipline Inspection Xu Lingyi came to the region and cracked down on 1,194 illegal villas.

The incident had a great impact. Eighty-nine million people watched the documentary, and a disciplinary renewal campaign began. The time when the central order cannot go beyond the gate of the leader’ residence is over. The flexibility that order come from the high level but measures are set up at the lower level is about to disappear. In China, the direction of the highest leader is more powerful than government documents, and the documents are more powerful than the law. The Qinling incident deserves to be recorded in history as a central imperial power’s overwhelming victory after being pushed by regional leaders.

Now they say “A greater Chinese community.” Pan Yue, executive vice president of the Central Academy of Socialism, contributed the article “A greater Chinese Community and Community of Human Destiny” to Study Times. He asked for unity of the pan-Chinese sphere. History projects are also brooding. On Jan. 2, a Chinese history research center was established under the Chinese Academy of Social Science. Xi sent a congratulatory message. The specter of Sinocentrism is about to return. Having mended the dragon’s vein, Xi Jinping’s absolute power is the key variable for Korea’s diplomacy.