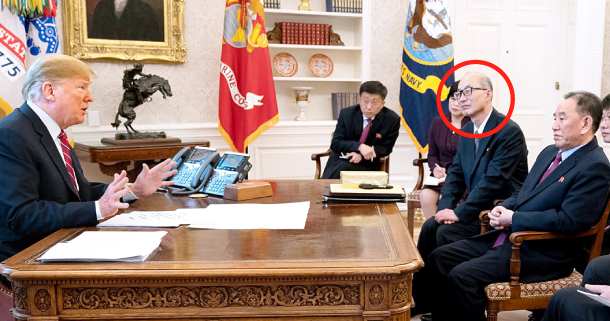 In photos of the Oval Office talks with Trump released by the White House on Jan. 19, Pak sat right next to Cho, wearing glasses and sitting upright with his hands politely folded in front of him.

Little is known about Pak, a former senior counselor at the North Korean Permanent Mission to the United Nations in New York. He is also not listed on the South Korean Unification Ministry’s database of key North Korean figures released in 2018.

Foreign affairs and security officials were buzzing about who this relatively unknown figure was as the high-profile North Korean delegation made a visit to Washington earlier this month to work on holding a second summit between Trump and North Korean leader Kim Jong-un.

Won Hyung-joon, a South Korean violinist, has kept in touch with Pak since 2009. Won is the executive director of Seoul-based Lindenbaum Music, a project orchestra that was established in 2009 in the hopes of bringing together the two Koreas through music.

Won told the JoongAng Ilbo on Tuesday that Pak “is a figure that has put a lot of interest in inter-Korean relations through cultural exchanges.”

Won said Pak contacted him in 2009 after he revealed plans for an inter-Korean youth orchestra to perform in Pyongyang. They dined together in New York numerous times afterward, he said.

“Pak is a gentleman who always was considerate of others and used formal language to me even though I was younger,” said Won. “It is a good signal that such a person has come to the forefront of North-U.S relations.”

Won and Pak exchanged over 100 emails through 2011 to prepare for an inter-Korean orchestra performance in Pyongyang.

However, the sinking of the Cheonan warship in March 2010, which killed 46 South Korean sailors, and the shelling of Yeonpyeong Island that November led to a freeze in inter-Korean relations.

Won said Pak, during that period, wanted to make a breakthrough in inter-Korean relations through cultural exchange. However, their communication was cut off following the death of former North Korean leader Kim Jong-il in December 2011.

Won was again able to get in touch with Pak in 2013, after Won’s lecture at the Oxford Union in Britain in February that year. Won, during the Oxford Union lecture, touted the importance of an inter-Korean youth orchestra to promote harmony between the South and North.

Through an email to Won, Pak said he enjoyed the lecture and that Won should be “making preparations” for such a plan. However, their contact was again cut off as inter-Korean relations soured.

Won heard afterward from officials from the New York-based North Korean mission to the UN that Pak returned to Pyongyang in a “good position.”

Recently, Pak has surfaced as the right-hand man of Kim Yong-chol, who also doubles as the director of the North’s United Front Department, which is responsible for inter-Korean relations.

Won also described Pak as being fluent in English. He used the term “expediting your visit” in one email exchange, displaying a strong command of the language. Pak learned English by listening to BBC radio, according to Won.

“As I discussed with Pak, I hope that an inter-Korean orchestra can perform in Seoul, Pyongyang and the United States,” said Won.