Funeral insurance scams take poor elderly for all they have

Funeral insurance scams take poor elderly for all they have 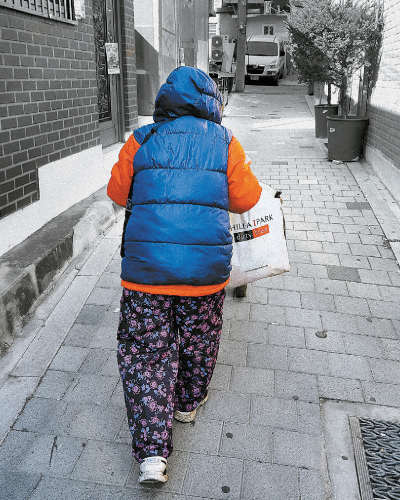 Kim Ok-ja pushes a cart she uses to collect waste paper in her neighborhood in central Seoul earlier this month. [JEONG JIN-WOO]

Kim Ok-ja, 74, makes a living by selling waste paper and lives by herself in a house near Dongdaemun, central Seoul. Even during freezing weather, she recycles discarded paper and boxes, earning just a few thousand won a day.

Kim’s two children left her when things became financially difficult in their household, and her husband passed away from lung cancer in 2012. Because she didn’t have enough money for a private funeral for her husband, she received help from the local government for a simple funeral.

This experience pushed her to sign up for a funeral service policy. She subscribed for a policy that would provide 3.8 million won of services, such as a coffin, shroud and flowers, after she dies.

“I worked as a cleaning lady in office buildings during the day, and at night I picked up waste paper to submit 80,000 won to the mutual aid funeral service company every month,” Kim said. “This was the only way to prepare for my death.”

Kim submitted the money to the company for three straight years, until she received a phone call this year from the funeral insurance company saying it had gone bankrupt. The company told her to “come and collect the remains of her submitted payment,” which was just 320,000 won.

This was a small fraction of the 2.9 million won she had paid to the insurance company over the years. Kim’s plans for her funeral fell apart in an instant.

“God has abandoned me,” Kim said. “Saving that much money was excruciating - I’ve skipped meals for who knows how many times, and lived in a cold house just to save money on the heating bills.”

The current administrative law forces funeral insurance companies to deposit 50 percent of the clients’ money into the bank in cash. This would allow clients to receive at least half of their money if the company goes out of business.

Instead of depositing 50 percent of the insurance payments into the bank, most companies only deposit around 10 percent in cash. Banks generally allow these companies to cover the remaining 40 percent with credit.

As of last year, Korea’s 5.4 million subscribers to funeral insurance submitted 580 trillion won in total to their respective companies. The money these companies deposited to banks, however, was just 912 billion won, far less than the 50 percent of the submitted money required by law.

The company Kim subscribed to deposited only 8 percent of the fees its 7,000 clients submitted. The remainder was used by the CEO for his personal purposes.

“Every month, almost a billion won was submitted,” said the company’s CEO, surnamed Jang. “I couldn’t help but think, ‘what if I use this money to make more money?’”

He added, “The reason why so many funeral insurance companies, including mine, are going out of business is because the government hasn’t provided any regulations for using the [clients’] money.”

Meanwhile, the government has toughened the standards for those looking to start a funeral insurance company. It raised the required capital from 300 million won to 1.5 billion won last Friday. Forty-one out of 130 registered businesses do not meet the standard, and they have been forced to shut down. Approximately 22,000 clients of these insurance companies lost the money they put into them.

“There needs to be a strict limit or at least some kind of a regulation that prevents companies from using up all the clients’ money,” said a client who lost money after a funeral service company went out of business. “Otherwise, this will end up in a vicious cycle.”