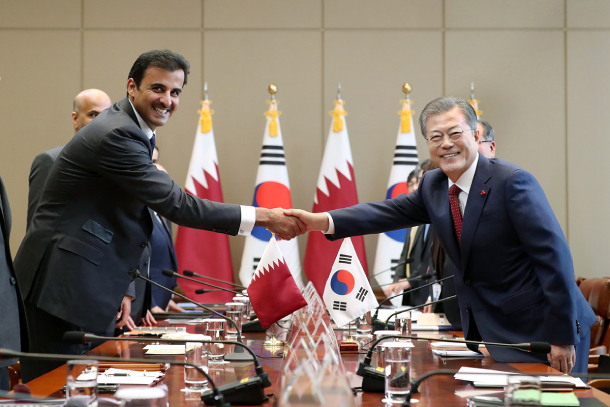 As part of his first summit diplomacy in the new year, Moon met with Emir Sheikh Tamim bin Hamad Al Thani, who arrived in Seoul Sunday for a two-day official visit. The monarch is Qatar’s head of state.

They discussed ways to help Korean companies expand forays into various fields in the Gulf state - including transportation and infrastructure - from the current energy, construction-focused sectors, the Blue House added.

Korea and Qatar established diplomatic ties in 1974. They were upgraded to a comprehensive partnership in 2007.

“The countries have much potential to enhance cooperation in various areas. I hope that your official visit can upgrade the two nations’ relationship and pave the way for expanding cooperation on the global stage,” Moon said.

He also congratulated the emir on Qatar’s recent advance to the semifinals of the Asian Football Confederation (AFC) Asian Cup and wished for Qatar’s successful hosting of the 2022 World Cup.

In response, Tamim stressed the solid ties between Seoul and Doha, expressing hope that his visit can help elevate the bilateral relationship.

He added that his country will seek help from Korea in preparing for the 2022 World Cup, citing the South’s experience in hosting big international sporting events.

Tamim’s trip marked his fourth visit to Korea. He last visited in November 2014.