Can Shin take the Wibee all the way to the postseason?

Can Shin take the Wibee all the way to the postseason? 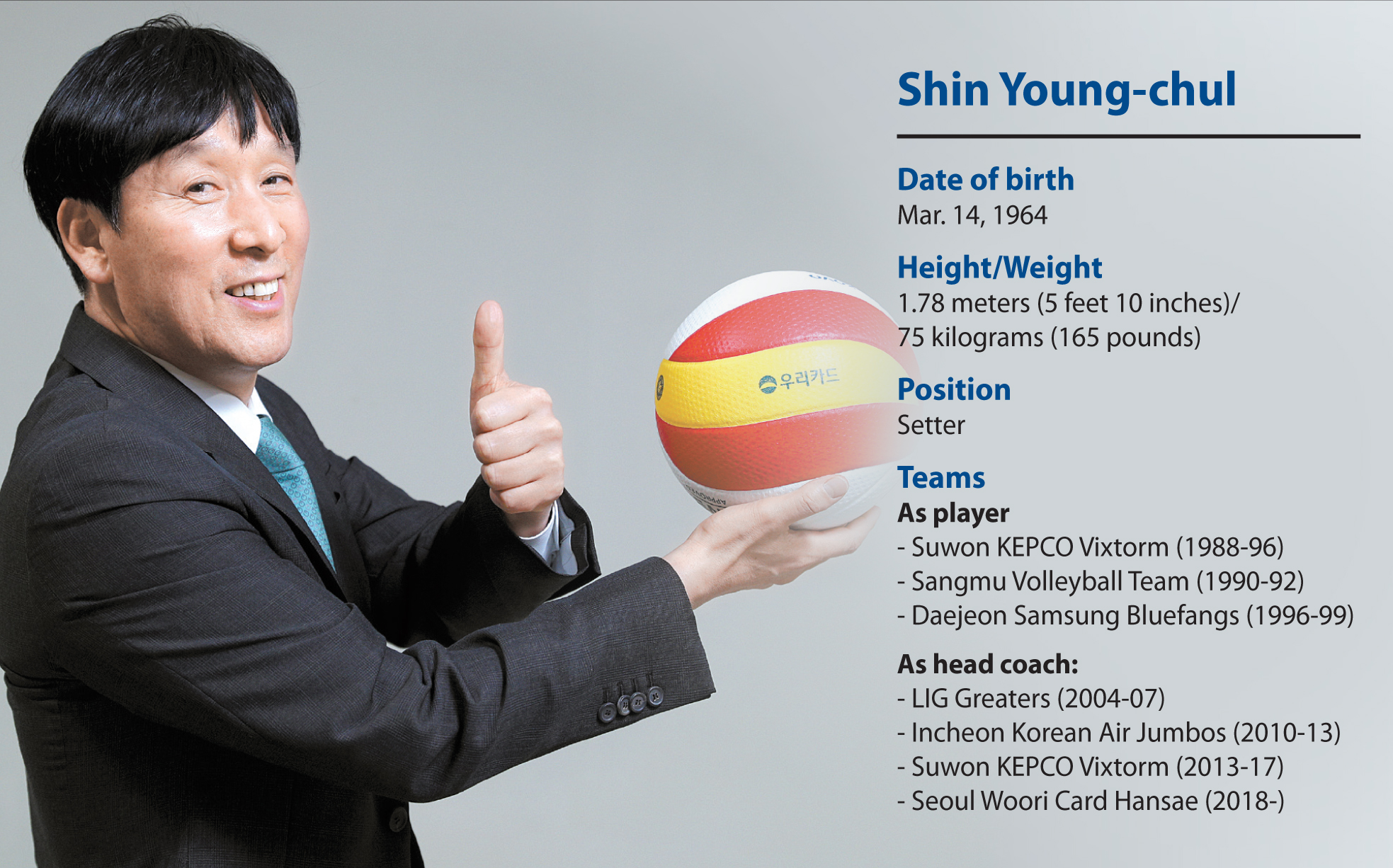 Head coach Shin Young-chul poses for a photo at a gymnasium in Incheon Tuesday. [LIM HYUN-DONG]

Shin Young-chul, head coach of the Seoul Woori Bank Wibee, has only missed out on the postseason in 4 of his 11 years managing Korea Volleyball Federation (KOVO) teams.

But this season it looked like Shin’s remarkable record wouldn’t be enough. When he announced his appointment to the Wibee in April 2018, a lot of the fans believed his magic just wouldn’t work at the only club in Korea that has never qualified for the postseason. In the past three seasons, the team has finished seventh, fifth and sixth in the seven-team league.

But Shin has done it again. As of Wednesday, the Wibee is ranked third, with 16 wins and 10 losses, totaling 50 points. Under Shin’s management, the team is seeking its first ever advancement to the postseason.

“As soon as I accepted the offer to coach the team, I thought about the postseason,” Shin said. “I was looking at about 22 to 25 wins this season and if we played better during the fifth and the sixth round, I believed we’d have a better result.”

If the Wibee gets at least six wins in the remaining 10 matches, the team will manage exactly what Shin wants.

When he was first appointed head coach, Shin made a controversial decision to change almost the entire lineup right before the 2018-19 season started.

“I gave opportunities to players until the KOVO Cup in September 2018,” Shin said. “As a result, I came to a decision that I need to create a new team even though the season was soon approaching. I got rid of the players who didn’t fit the team.”

The trades may have resembled risky moves for the Wibee, but they were the right decision. Since No is taller, standing at 1.91 meters (6 feet 3 inches), his toss at a higher point worked perfectly and, thanks to Yun’s experience, the Wibee’s centers are a lot more stable.

“I strongly recommended bringing in Yun Bong-woo,” Shin said. “But I wasn’t expecting No Jae-wook’s trade. I first got a call from the [Suwon KEPCO] Vixtorm, but I didn’t call them back right away because they’ll notice that I want the trade.”

In addition to the new players, the club’s success also comes from its foreign player Agámez, the KOVO’s top scorer. As of Wednesday, Agámez has scored 764 points for the season.

Agámez may be the best player in the league, but it wasn’t easy for the rest of the team to play with him. Standing at 2.08 meters, Agámez is considered a strong hitter in the European leagues, but he has a temper. When his team doesn’t play well, Agámez struggles to control his temper and, due to this, his teammates struggle to get along with him.

When Shin was first appointed, he focused on bringing the team and Agámez together.

“I have a Ph.D. in player training,” Shin said. “I focused a lot on the players’ psychology. Since Agámez has pride in himself, he needed someone better than [him to tell him what to do]. So I went up to him and told him that although I’ve played at a different time period, I won the best setter award three times at the World League and the World Cup.”

Shin also talked to the other players about Agámez’s attitude.

“I told our players Agámez is acting like that because he’s a competitive player,” Shin said. “Since our players know it’s just his personality, they get along with him fine now.”