A deal is reached in Gwangju

A deal is reached in Gwangju 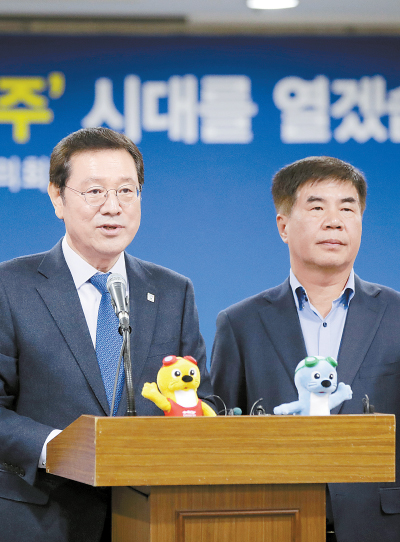 Lee Yong-seop, left, the mayor of Gwangju, and Yoon Jong-hae, head of the Federation of Korean Trade Union’s Gwangju office, announce the results of a meeting between representatives from the local government and area employers, labor unions and citizens at Gwangju City Hall on Wednesday. The council decided to accept a compromise proposal regarding the terms of wage negotiations, one of the major flashpoints between the two parties. They will hold a ceremony to mark the agreement today and will likely announce the specific details of the deal. In the previous agreement, Hyundai Motor and the city of Gwangju agreed to build a joint-venture plant in Gwangju capable of producing 100,000 cars per year. In the latest negotiation, the annual wage for workers in the project will be set at around 35 million won ($31,300) compared to the industry average of above 90 million won. Hyundai Motor’s union had strongly protested the plan and threatened to strike if the project was finalized between the city, the local labor union and the carmaker. [YONHAP]