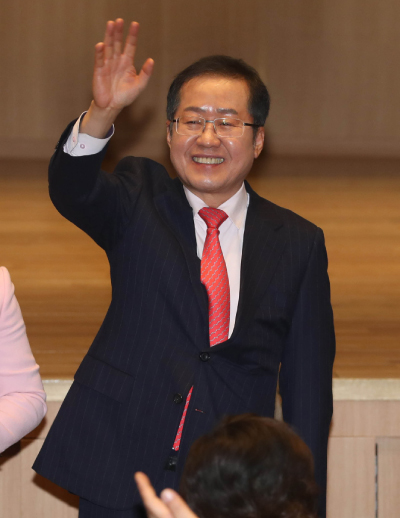 Hong joins former Prime Minister Hwang Kyo-ahn and former Seoul Mayor Oh Se-hoon in what is expected to be one of the most competitive and high-stakes leadership races in the history of Korea’s leading conservative party.

“I will once again return to the front,“ Hong said as he announced his candidacy for party leader at a press conference Wednesday. “I will throw all I have left into rebuilding the party and taking back power.”

His announcement follows that of Hwang’s on Tuesday, while Oh has said he would launch his bid within the week.

Korea’s legislative electoral system makes the leadership race right before parliamentary elections the most important. Intraparty factions often wage a fierce struggle to seize chairmanship of their respective parties, since the seat usually grants the leader enormous power to pick their candidates in both the constituencies and party list.

More often than not, leaders grant nominations to their allies, while attempting to weaken the influence of rival factions by reducing their share of seats.

The origins of the fierce internal animosity in the LKP can be traced back to the nomination process for the 2008 and 2016 legislative elections. Ahead of these elections, the factions loyal to former Presidents Lee Myung-bak and Park Geun-hye fought to dominate the nominations of conservative Assembly candidates.

February’s race holds even more weight than usual for the LKP, since the three main candidates for its leadership are presidential hopefuls in their own right and will likely use the chairmanship as a stepping stone for a bid to take over the Blue House.

In a favorability poll for the LKP leadership election released Wednesday, Hwang led with 21.5 percent, with Oh following behind at 16 percent and Hong at 13.2 percent.

The former prime minister is viewed by many as the favorite to win the race, since he commands a great deal of support from the pro-Park Geun-hye faction, which is currently believed to be the largest faction in the LKP. Nonetheless, the lead he holds over his rivals is far from dominant. Oh and Hong, as well as at least three other minor candidates, are expected to mount a significant challenge by rallying non-Park faction lawmakers to their sides and bleeding Hwang of support by some pro-Park lawmakers that are still undecided.

While he lingers in third place, Hong has the advantage in terms of social media presence. His YouTube channel - TV Hongca Cola - has over 240,000 subscribers and regularly posts videos featuring strident criticism of the Moon Jae-in administration and what he calls a “frightful conspiracy” by the left to unify Korea under a communist-friendly government.

Famed for his Trump-like, aggressive language, Hong has frequently been a target of public criticism by those who claim his belligerent style of speaking is demagoguery polluting Korean politics.

But it was precisely Hong’s lack of inhibition that political analysts say allowed the LKP to retain its conservative base after massive public backlash against the party following Park Geun-hye’s impeachment in 2017.

While LKP support initially trailed behind those of even minor parties ahead of the snap presidential elections in May that year, Hong’s clear conservative image rallied conservative voters unsure of who to support back into the arms of the LKP.

Some analysts said after the election that while the LKP lost the presidency to Moon and the ruling Democratic Party (DP), Hong’s campaigning allowed it to defeat challenges from minor parties, such as the Bareun Party that was attempting to unseat the LKP as the leading voice of Korean conservatism.

“This party is a party that I built up from the ashes of impeachment with the help of fellow party members,” Hong wrote on his personal Facebook page Wednesday.

In his typical no-holds-barred fashion, Hong dressed down Hwang’s candidacy in that post.

“Letting this party return to becoming the party of impeachment, corruption, pro-Park, privilege, and draft evasion is a crime to Korea’s conservatives,” he wrote.

All such descriptions are jabs at Hwang, whose role as Park’s last prime minister and acting president during her impeachment trial have been a constant source of criticism by his rivals, both within and without the LKP. Hong was especially vocal about detaching the party’s image from the disgraced Park administration as a presidential candidate and party chairman following that election, though he had to step down as leader after the LKP suffered a humiliating defeat to the DP in last year’s local elections.