Popular YouTubers fall after secrets get revealed: As the influence of online content creators grows, so too does their responsibility

Popular YouTubers fall after secrets get revealed: As the influence of online content creators grows, so too does their responsibility

Left: YouTuber Eukktube’s channel was recently shut down for violating YouTube’s regulations. Right: YouTuber Kagwang shut down his Facebook page and Youtube channels after his past wrongdoings were revealed. [SCREEN CAPTURE]

The popularity and influence of popular online content creators on platforms such as YouTube and Facebook has grown rapidly in recent years. As personalities attract loyal followings in the thousands, and even millions, their fans come to hold them to high standards and become powerful forces in their success. But, just as soon as fans will bring you fame, it has been seen recently that they will quickly call you out for your faults

A YouTube channel titled “Eukktube” was the first to catch people’s attention. The channel has a long history, which goes back to a Facebook page started in 2014 named “Humor Storage.” The page was a place people posted jokes and funny images and expanded to nearly 820,000 by 2018. The page’s manager went by the nickname Kim Eukk-meo, a nickname that looks like the word “humor” when written in hangul.

As Kim and his Facebook page accumulated more fans that saw eye to eye with his point of view, he began also to create enemies who thought that his ideas were over-the-line and inappropriate. Kim would very openly attack feminists, left-wing politicians, the LGBT community and the country’s southwestern Honam region. His YouTube page, “Eukktube,” however, still managed to see some 600,000 subscribers.

Viewers had long suspected that Kim had been an active member of Korea’s far right website Ilgan Best - best known as Ilbe - and posted there under the username Pungdong, which Kim denied until Jan. 19.

That day, a video was uploaded to YouTube by a user with 10,000 subscribers named Jubrother that proved that Kim was Pungdong. The video currently has over 200,000 views.

On Jan. 22, Kim uploaded a 12-minute long response video on his channel titled “My Life,” in which he admitted that he was Pungdong.

In posts made to Ilbe, Kim mocked the victims of the 2014 Sewol Ferry sinking, by comparing them to boiled dumplings. He also said that President Moon Jae-in would “not die a natural death” and called the 2017 candle-vigil protestors dumb, among other offensive remarks.

“I didn’t even know that I had wrote such a thing,” Kim says in the video. “It was me, and I wrote them… I was a human trash. I can see it myself that I’m missing something as a human being.”

Soon after, both his Facebook page and YouTube channel were shut down. On a secondary YouTube channel titled “Eukktube Maeunmat,” he uploaded a video on Wednesday titled, “I never meant to hurt anyone.” In the video, he explained an online rumor that he had threatened to kill another well-known YouTuber, and also said hat he was the cause of his own fall.

“The biggest reason for my fall is that I wrote all those posts in the past, and that I went around calling out people without erasing those posts. It’s not because of anyone else,” said Kim.

Another online star who has stepped down from his digital throne is a YouTuber who goes by the nickname Kagwang. He gained popularity in the recent years through his satirical comic series that would touch on some of the most sensitive issues in society, such as bullying and digital sex crimes. His comic on the life of a victim of a digital sex crime, who had a video of herself having sex leaked online, gained thousands of likes and supportive comments for raising awareness on the issue. He even uploaded a video on YouTube saying, “So many people have given up on their lives, because of the revenge videos that are being circulated online as pornography. I hope that there aren’t any more victims in the future.”

At first, he evaded the issue when his followers asked him whether it really was him. But, he admitted to his past on Jan. 28 when things got out of hand.

“I admit to all my wrongdoings from when I was younger, and I will let go of everything that I’ve been doing,” wrote Kagwang, stating his real name, Lee Sang-il. “I will contact the victims and apologize, and try to compensate for their damage. I am sincerely sorry to everyone that I’ve hurt, and I hope to mature through this incident.”

The fact that these YouTubers are apologizing and stepping away from creating videos is proof of the rising status of online content creators, according to culture critic Ha Jae-geun.

“As these YouTubers gain more popularity, and thus a louder voice in society, it’s natural that they are forced to take more responsibility,” said Ha. “Just like celebrities, these people now become the subjects of the public surveillance, and they must step down if that’s what the people demand - just like celebrities Kim Gu-ra and Yoo Seung-joon did in the past. Whether they’re forgiven in the future or not, is also up to the public to decide.” 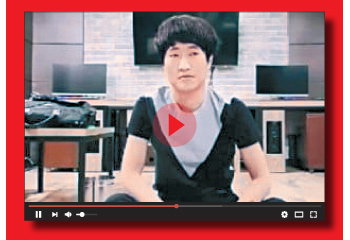 Prosecutors have requested a two-year sentence against Yoo Jeong-ho for defamation. [SCREEN CAPTURE]

Another online star recently caused a controversy for different reasons. Yoo Jeong-ho gained fame for his good deeds: helping those in need and calling bad behavior in a funny way. His videos, which were mostly posted on Facebook, gained a large following and viewers would often make donations to help him do good deeds. The most recent video, uploaded on Jan. 28, revealed that he had accumulated 63,363,254 won from his followers 12 hours after asking them to help a young boy suffering from leukemia.

The irony comes from the fact that there are over a hundred petitions on the Blue House website asking for help for Yoo.

Yoo revealed in April last year that he had been humiliated and beaten by his teacher in elementary school year for being poor. In a video uploaded on April 27, 2018, Yoo visited the teacher at his former school “to prevent any more victims,” but fails to meet them in person. In May, the teacher reported him to police for defamation.

On Jan. 26, Yoo revealed that prosecutors had requested a two-year sentence for him. The two-year request was based on the fact that “The contents of the video are false,” according to prosecution. According to the law, defamation by circulating true facts can get a person up to two years in prison or a fine of up to 30 million won, but it’s not common that prosecutors request a full sentence in such a case, according to legal experts.

The reason for the recent controversies may be because while online stars are just as famous as many celebrities, they fail to see that they have suddenly become influential, according to culture critic Kim Bong-suk.

“The internet is a mixed space - it’s both private and public at the same time. But because the content creators fail to see that, they blurt out anything they want to say when they’re not famous. When they reach a certain level of fame, it’s usually already too late to explain themselves. The best thing to do is to make a proper explanation before you get too popular, and let people know that you’ve seriously thought things through,” said Kim.