Containers stacked up at a port in Busan on Dec. 28. Despite exports reaching a milestone of ＄60 billion last year, outbound shipments in December and January this year have fallen. [YONHAP]

Exports have continued to fall for a second month, but at a steeper rate, confirming concerns raised by Finance Minister Hong Nam-ki earlier this week.

Although Korea succeeded in posting a trade surplus for the 84th consecutive month, a new record, exports in January fell 5.8 percent, sharper than the 1.2 percent drop recorded in December.

This is the first time since September and October 2016, when exports fell for two consecutive months.

According to the Ministry of Trade, Industry and Energy on Friday, Korea’s exports in January amounted to $46.4 billion.

Imports also retreated, losing 1.7 percent to $45 billion. As a result, Korea’s trade surplus in January was $1.3 billion, which is one-third of the $3.4 billion surplus reported a year ago.

The ministry, however, said the decline of Korea’s exports wasn’t exclusive to Korea as other countries have also been falling as well. 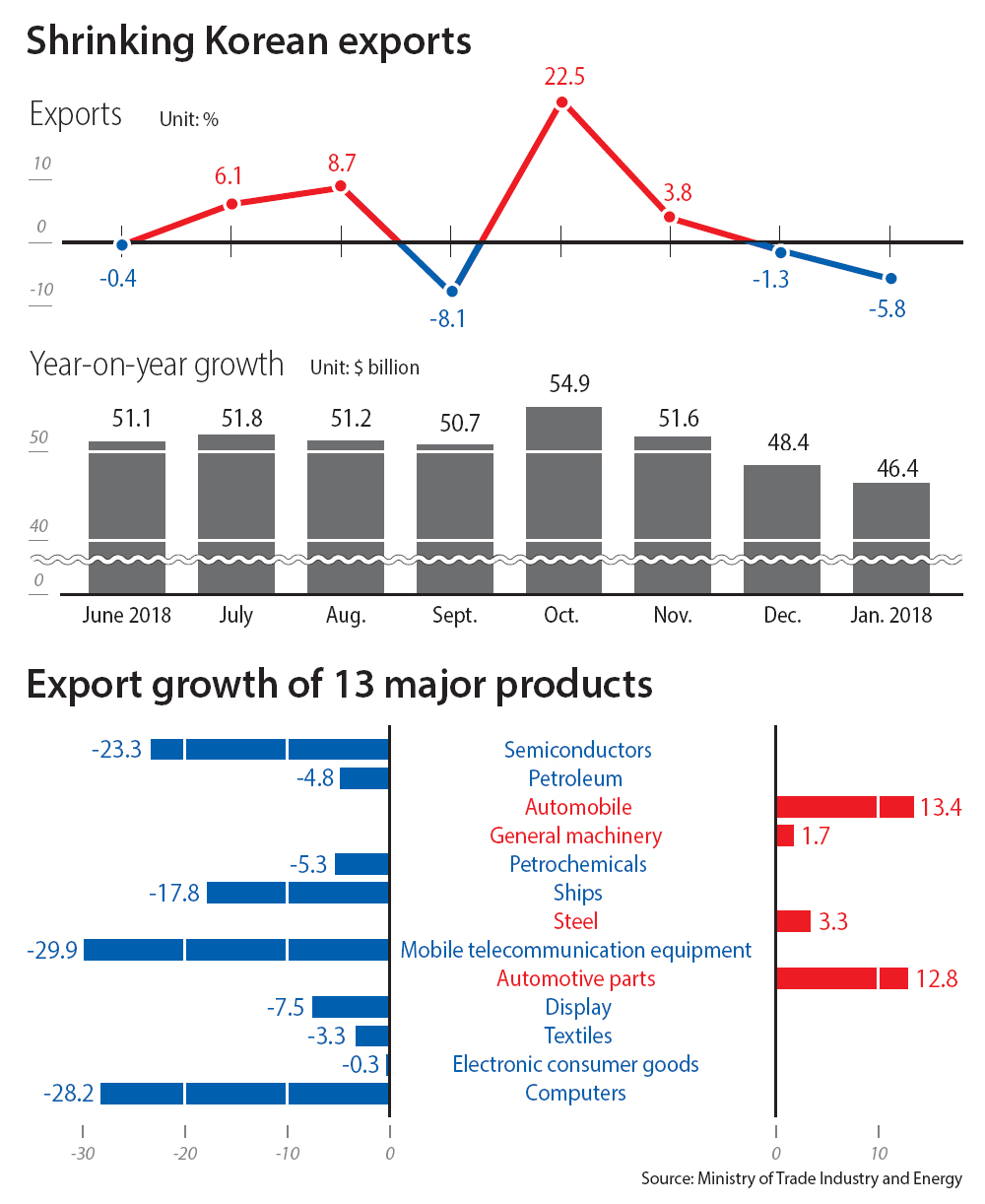 The ministry said the decline was largely the result of external factors including the trade dispute between the United States and China, uncertainties resulting from Brexit, falling prices of semiconductors and crude and the slowing growth of the Chinese economy.

Semiconductors, which were the largest contributor to last year’s thriving exports, played the biggest role in pulling down the number in January and December. Exports fell 23 percent compared to a year ago to $7.42 billion. Semiconductors account for roughly 20 percent of all Korean exports. Semiconductor exports have been shrinking after reaching a high of $12.4 billion in September 2018. The figure fell below $10 billion in December for the first time since April last year.

The ministry blamed the falling price of semiconductors as global IT companies have been delaying additional purchases since the second half of last year. The price of an 8 gigabyte DRAM chip nosedived 36.5 percent from $9.60 a year ago to $6.10. The price of a 128 gigabyte NAND memory has fallen 22.4 percent from $6.7 to $5.2.

Falling crude prices was another factor that drove down exports. Petroleum product exports fell 4.8 percent to $3.47 billion, while petrochemical goods slipped 5.3 percent to $3.98 billion. International oil prices have been falling since October last year. Last month, the price of a barrel of oil was down 10.7 percent on year.

But these weren’t the only export items that struggled.

Mobile telecommunication goods exports, including smartphones, have fallen 29.9 percent while computers exports are down 28.2 percent. Exports of ships fell 17.8 percent and displays were down 7.5 percent.

Mobile telecommunication exports to the United States fell 9.7 percent, while the figure for member countries of the Association of Southeast Asian Nations (Asean) saw a steeper drop of 21.9 percent.

On the contrary, automotive exports, which struggled throughout 2018, appeared to recover, growing almost at the same rate as a year ago.

Steel was another export good that saw an increase thanks to rising prices. When compared to a year ago, it grew 3.3 percent to $2.8 billion.

By country, China, which is Korea’s No. 1 export market, tumbled 19.1 percent. China, as of last year, accounts for 26.8 percent of Korea’s exports.

While the majority of the goods exported to China all fell last month, semiconductors, petroleum and petrochemical goods were hit especially hard. Semiconductor exports plummeted 40 percent in the first 20 days of last month to $1.61 billion, while petroleum exports fell 36.4 percent. Petrochemical exports lost 13.7 percent. The three products account for 44 percent of exports to China.

Exports to the United States rose 20.4 percent to $6.21 billion, largely thanks to import of Korean automobiles, particularly SUVs, which saw an uptick of 43.4 percent.

EU exports also grew in the double digits at 11.9 percent to $5 billion.

It said that rechargeable battery exports have been rising over the last three years and are now expected to surpass exports of electronic consumer goods, which amount to $7.22 billion.

Biohealth exports have been growing in double-digits for four consecutive years. Last year, they reached a record of $8.15 billion, up 13 percent. Last month, however, biohealth exports fell 1.6 percent to $560 million. The ministry said that it still expects exports of biohealth goods to rise over the course of the year.

OLED panels and electric vehicles are also seeing an increase in exports. OLED panels last month grew 12.8 percent to $800 million, while electric cars saw a surge of 184.7 percent to $280 million.

The finance minister said the government will be coming up with measures to help small- and medium-sized exporters that may struggle from the recent turnaround, while Trade, Industry and Energy Minister Sung Yun-mo on Friday emphasized that the government will do its best to revitalize all exports.

“Our plan will not be concentrated on short-term measures, but committed to all 365 days so that we can achieve $600 billion of exports by the end of this year,” Sung said.

Korea, last year, reached a new milestone with exports exceeding $600 billion. However, with the global economy expected to shrink, there have been concerns that, this year, Korea’s exports may fall back below that threshold.

“In a Jan. 21 export strategy meeting, we initiated a pan-government and a private-government joint support system, and since Jan. 30, we started a program of consulting on export difficulties in 15 cities starting with Changwon in South Gyeongsang,” the minister added.