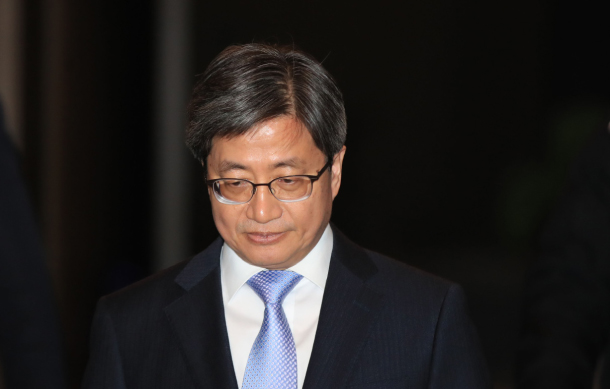 Supreme Court Chief Justice Kim Myeong-su on Friday broke his silence on the controversy surrounding the conviction of a prominent governor, speaking out against how the ruling party questioned the trial’s fairness.

While briefly answering questions from reporters on his way to work, the chief justice said, “the people should be allowed and even encouraged to lay out a healthy criticism of the contents or results of the trial.”

“But if that [criticism] goes beyond the limit, uses excessive language or turns into an attack on an individual member of the judiciary, this is not appropriate based on the principles of judicial independence and the rule of law,” he added.

Chief Justice Kim’s words are a response to recent moves by the ruling Democratic Party (DP) to challenge the legitimacy of South Gyeongsang Gov. Kim Kyoung-soo’s trial on Wednesday. The Seoul Central District Court, presided over by Judge Seong Chang-ho, sentenced the governor to a two-year jail sentence and placed him under immediate detention for his role in a massive online opinion-rigging scandal during the last presidential elections.

Yang, who served as chief justice of the Supreme Court from 2011 to 2017, is currently awaiting trial at the Seoul Detention Center on several dozen charges of power abuse that include meddling with trials to curry favor with the former administration. Seong worked as one of his secretaries from 2012 to 2014.

Concerned that the detention of Gov. Kim - a rising presidential hopeful in the DP, owing in part to his close ties to President Moon Jae-in - would further destabilize the party’s steadily waning public support, the DP decided to take the issue head on by announcing after the trial on Wednesday that it would launch an effort to purge “corrupt elements” within the judiciary known to have colluded with Yang.

This was met by a fierce backlash from many in the judiciary, who called the ruling party’s response an attempt to undermine the constitutional principle of separation of powers because of a ruling it did not like.

The words from Chief Justice Kim Myeong-su, the highest-ranking figure in Korea’s judiciary, testify to just how high tensions between the ruling party and the judiciary have become over the last two days.

Several sources in the judiciary, however, say that the chief justice gave his response too late and failed to stand up for the courts as they were openly being attacked by politicians. On the condition of anonymity, one district court judge told the JoongAng Ilbo that Kim Myeong-su “should have stood up earlier as head of the judiciary to soothe the anger and feeling of loss within the courts.”

Challenging Kim’s leadership over the branch, the judge added that “[people] should question whether Chief Justice Kim is truly putting in everything to [combat] the voices trying to undermine the independence of the judiciary.”

Some members of the DP also have publicly stepped back on Friday from some of the comments made by its members earlier due to concerns that a hard-line stance could backfire against the party. Three-term Rep. Woo Sang-ho said on a radio program that current floor leader Rep. Hong Young-pyo’s comment that Kim’s conviction was a “systematic revolt by the judiciary” was excessive, since the ruling was made by a single judge.

Another DP lawmaker, Rep. Keum Tae-sup, told the JoongAng Ilbo on Friday that criticisms of the ruling should focus on objective content” rather than the judges involved or the judiciary at large.

Such voices, however, could be a minority in the ruling party. All of the DP’s lawmakers from the South Gyeongsang and Busan region issued a joint statement criticizing the court for Kim Kyoung-soo’s conviction on Friday.