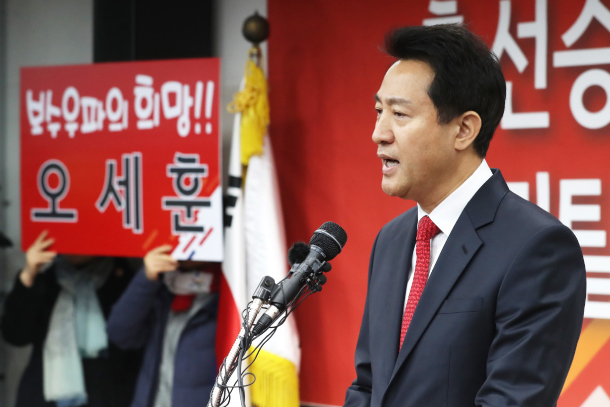 Former Seoul Mayor Oh Se-hoon announces his bid to run for the chairmanship of the main opposition Liberty Korea Party at the party headquarters in Yeongdeungpo District, western Seoul, on Thursday. [NEWS1]

With the race for the leadership of the main opposition Liberty Korea Party (LKP) heating up as the party’s convention on Feb. 27 approaches, candidates remain divided over the party’s relationship with former President Park Geun-hye.

“Over the last two years, the Moon Jae-in administration has steadily proceeded with plans to forever sink [the country],” Oh said. “We must no longer deny [the legitimacy] of impeachment. We must now overcome the politician that is Park Geun-hye.”

Oh’s call for the party to move on from its defense of Park has reignited the debate over the LKP’s relationship with the disgraced former president. Park is currently imprisoned for her role in a massive corruption scandal that rocked the country two years ago.

The LKP, formerly known as the Saenuri Party, never renounced its ties to Park even as it cost it dearly in both the presidential and local elections over the last two years. The main reason for this is that thousands loyal to Park coalesced around the LKP during her impeachment process, seeing the party as the bulwark against the majority of the public who cheered her ouster and eventual arrest.

With these forces now forming the bulk of the LKP’s rank-and-file membership, as well as much of the party’s leadership, other candidates, such as Hong and Hwang, are openly calling for a pardon for Park, hoping to win the support of the party’s pro-Park wing.

Hong joined the debate over the Lunar New Year holidays when he proclaimed Park should be released from prison, a radical about face from his actions as LKP chairman in 2017. Hong kicked Park out of the party in order to detach the party from her legacy.

Analysts view Hong’s moves as an attempt to siphon away the pro-Park wing’s support for Hwang, Park’s former prime minister and her interim replacement during her impeachment trial. Hwang currently leads in the polls, with the lion’s share of the pro-Park support in the party.

On Wednesday, Hwang, too, attempted to cement this support by claiming “many people believe former President Park should be released,” implying he supported her release.

Oh, on the other hand, appears to be casting himself as the voice for those in the party who oppose reforging ties with Park. He is taking a position that may not be popular with the party’s more conservative base, but may resonate with a larger portion of the general electorate.

Oh was one of several dozen Saenuri politicians who left the party after Park’s impeachment in early 2017 to form a new conservative party. This experiment ultimately fell apart, with the bulk of the defectors returning to the LKP in subsequent months.

But this record is not the only handicap hurting Oh’s popularity in the party. The other is his controversial resignation as Seoul mayor back in 2011. He stepped down from his position after a city-wide referendum on providing free school lunches in the city collapsed after voters failed to turn out.

Oh’s exit was believed to have led to the election of the liberal Park Won-soon as his replacement in the by-elections that year, the first of a political domino that eventually resulted in the conservatives losing their majority in the legislature in 2016 and breaking apart altogether after Park’s impeachment.

While the LKP has recovered much of its base since then, it remains fractured over Park, who will likely remain a central figure in conservative politics in Korea for years to come.

That identity crisis looks like it will come to a head on Feb. 27, though the date for the convention could be delayed as it coincides with the planned U.S.-North Korea summit in Vietnam.