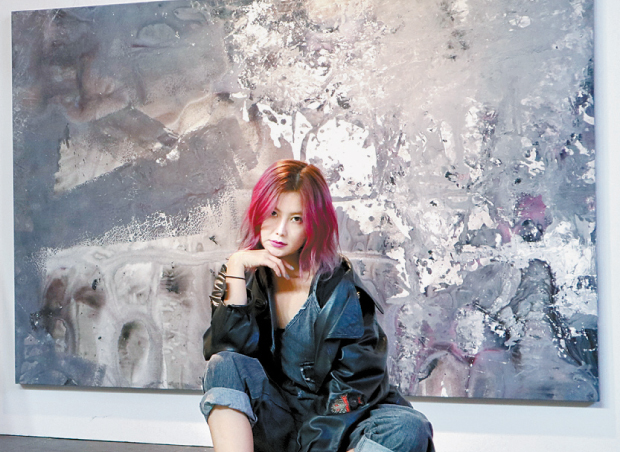 Kwon Ji-an, also known as singer Solbi, will display her artwork at the National Assembly from Feb. 11 to 13 to promote an art exhibition that will be held in July for Comfort Woman Day, her agency MAP CREW said on Friday.

Her work “Hyperism Red” will be put on display for three days in the second floor lobby of the National Assembly along with works by other artists to promote an upcoming exhibition in the United States, titled “Do the Right Thing,” which will be held in Glendale, California, in July.

“‘Do the Right Thing’ exhibition is held every July to raise awareness for ‘Comfort Woman Day,’ which was designated by the city in 2012, and Kwon Ji-an is doing her part by displaying her work,” said the agency.

Comfort Woman Day falls on July 30 to commemorate the women who were taken as sex slaves - euphemistically referred to as comfort women - during World War II.

The exhibition has been put together by the National Assembly’s Gender Equality and Family Committee, and includes works by artists such as Lee Lee-nam, Hong Il-hwa, Shin Chang-yong and Lee Jae-hyung.

Kwon’s work, “Hyperism Red” was created by using red, white and black to express how women’s voices are suppressed by society and how they are left to cure their own wounds by themselves.

“Kwon Ji-an will also take part in the exhibition in the United States in July, and she is preparing something special for it,” said the agency.