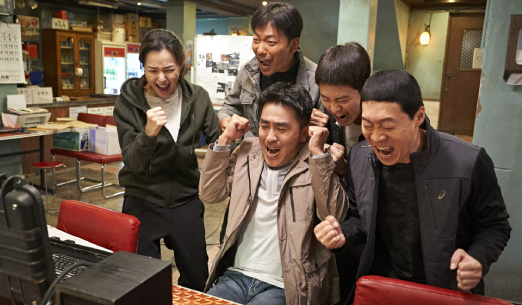 The sensational comedy title “Extreme Job” remained invincible amid a flood of new releases, including the sci-fi blockbuster “Alita: Battle Angel” and “The Lego Movie 2: The Second Part,” which topped North America’s weekend box office. In its third weekend, “Extreme Job” has become Korea’s best-performing comedy title, pushing down the 2013’s “Miracle in Cell No.7” (12.81 million tickets), in which Ryu Seong-ryong also co-stars.

From Friday to Sunday, “Extreme Job,” directed by Lee Byeong-heon, who also helmed comedies like “Twenty” (2015), sold 1.85 million tickets at 1,706 screens, accounting for 59.5 percent of the entire weekend ticket sales revenue. The total ticket sales of the comedy now stand at 12.83 million as of Sunday, according to the data provided by the Korean Film Council on Monday.

Starring Ryu, Lee Ha-nee, Jin Sun-kyu, Lee Dong-hwi and Gong Myoung, the movie revolves around a low-performing police drug squad that attempts to take down a criminal organization. To do so, they open a chicken restaurant that does unexpectedly well, interfering with their investigation.

Set several centuries into a dystopian future, “Alita,” co-produced by James Cameron of “Avatar” (2009) and directed by Robert Rodiguez of the “Sin City” franchise, revolves around a strange, big-eyed amnesiac cyborg named Alita (Rosa Salazar), who is rescued from a scrap heap and nursed back to health by a doctor (Christoph Waltz), who tries to help the girl remember her past.

“Hit-and-Run Squad” slid down a spot from last weekend to land in third place.

In its second weekend, the crime action flick sold less than half of what it had sold in its debut weekend. From Friday to Sunday, the movie sold 220,000 admissions at 734 screens. Its total ticket sales now stand at 1.73 million.

Starring Gong Hyo-jin, Ryu Jun-yeol and Cho Jung-seok, the film centers on police officers that attempt to chase down a race-car-driver-turned-businessman (Cho) who commit crimes while speeding around in flashy cars. 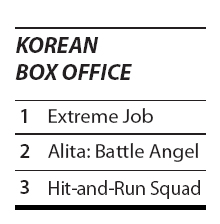 Amid the success of comedy titles this year, including “Extreme Job” and the body-swap tale “Inside Me,” audience members will be met with another highly-anticipated domestic comedy title, “The Odd Family: Zombie on Sale,” later this week.

Starring Jung Jae-young, Um Jee-won and Kim Nam-gil center, this zombie title revolves around a suburban family whose lives get disrupted after the elderly father gets bitten by a zombie. Instead of becoming a horror film, however, the movie takes a turn and opts for humor, starting with the bitten father suddenly getting younger.