A critical division in Washington

A critical division in Washington 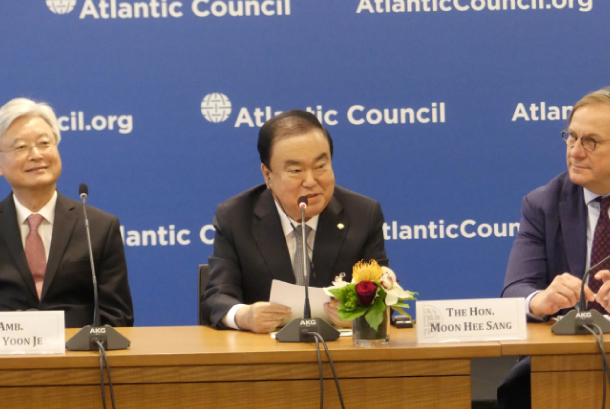 With the second U.S.-North Korea summit scheduled to be held in Vietnam soon, the U.S. Congress and Korea’s National Assembly seem confused. A delegation of 14 members led by National Assembly speaker Moon Hee-sang and another group of 7 representing the opposition Liberty Korea Party led by floor leader Na Kyung-won visited Washington. The first group delivered the Moon Jae-in administration’s position on improving inter-Korean and North Korea-U.S. relations, while the latter conveyed its concerns on the possibility of a bad agreement on denuclearization.

Four lawmakers, including Na and Foreign Affairs and Unification Committee Chair Kang Seok-ho, also belong to the National Assembly delegation and would attend some events, including a meeting with House Speaker Nancy Pelosi. They also set up separate meetings with local politicians, experts and correspondents. Kang said he wants to deliver to the United States the opposition’s position that it should not be a meeting to freeze nuclear programs and that the U.S. forces in South Korea (USFK) or joint military drills must not be discussed.

In the U.S. Congress, some Republicans expressed skepticism. Senator Mitt Romney told the Hill, “High hopes, but no particular expectations […] The North Koreans have proved over the years that their promises can’t be relied upon.” Cory Gardner also said there should be specific measures, such as reporting and inspection beyond specific facilities that North Korea offers, and otherwise, the meeting should be canceled.

Skepticisms from both sides arose after U.S. Special Representative for North Korea Stephen Biegun spoke at Stanford University last month. He proposed first dismantling plutonium and uranium-enrichment facilities. The phased plan raised concerns that Trump’s summit diplomacy would merely stop at freezing the North’s existing nuclear weapons and abandoning intercontinental ballistic missiles (ICBMs).
However, if all secret uranium production facilities other than in Yongbyon are dismantled, Biegun’s plan is not bad for the first step of denuclearization. Combined with thorough inspection and verification, it would be a strategic plan to move to the next level of abandonment. David Albright, head of the non-profit Institute for Science and International Security, said that because the nuclear facilities are large in size, they would take more than 30 months to dismantle.

The question is whether North Korea will allow inspections on its secret nuclear facilities. Biegun has visited Pyongyang. I wonder whether the two Korean delegations brought their own plans. I am concerned they may have advocated contradicting options.