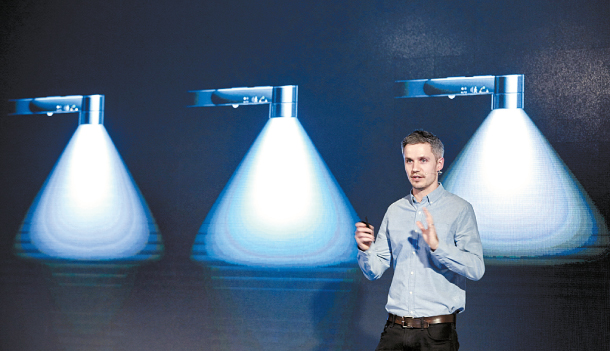 Korea is the third country in Asia where the lamp is being launched after China and Japan. It is currently being sold in several European countries.

The first lamp released by the company, Dyson’s Lightcycle Task Lamp claims to emit the equivalent of the current natural light level in the place where it is being used. It uses an algorithm based on data analysis of daylight in different regions around the world.

The lamp automatically adjusts its brightness and color according to the time of day - in the afternoon when the sun is up it emits a stronger light, whereas during the night time the lighting is softer.

”Artificial light is a modern invention; if you were to condense human [history] to a 24-hour period, we only had artificial light for seven seconds,” said Simon Cross, Dyson’s lighting design lead, during a media event held Tuesday in Gangnam, southern Seoul.

“But now we live 90 percent of our time indoors under artificial light. Our research showed that the wrong color temperature and brightness actually have a negative impact on our daily activities.”

The Lightcycle can also be connected to an app so users can adjust the lighting according to their age or what they are doing. Older eyes often require stronger light. There are pre-programmed modes for different situations. Relax mode, for example, offers a soft, yellowish lighting, while the Precision mode for working on detailed tasks emits a more intense, bluish light.

The lamp can last for 60 years, Dyson says, as it contains a cooling system using water and a copper tube inside to prevent the LED lights slowing in performance due to high heat.

For the British electronics maker, the Lightcycle is its first lighting product and the first item to be released with the input of Jake Dyson, the son of founder James Dyson, who joined the brand in 2015 after running a lighting business of his own for a decade.

Dyson has found success in Korea with products such as the cordless vacuum cleaner, wingless fans and hair dryer selling well despite their high price tags.

It remains to be seen whether the lamp will continue the trend, as local reporters raised questions during the Q&A session at Tuesday’s press event about the lack of a strikingly different design factor, something the brand is known for in Korea.

On the design, Cross said that, as with previous products, the lamp’s design focuses on the core technology under the company’s “Form follows function principle.”

“We never set out to just design a light for the sake of designing a light,” he said, “Our philosophy is to find problems that others are not addressing and spend a lot of time and research finding a better way.”