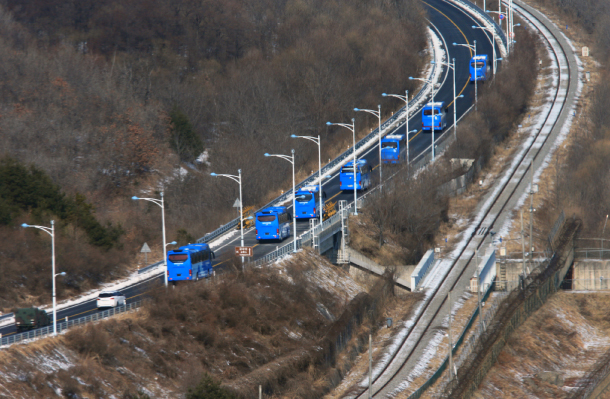 A non-governmental entourage of 251 South Koreans crosses the border to visit the North’s Mount Kumgang via a land route on the eastern coast Tuesday to attend a New Year’s ceremony. It is the first non-governmental exchange to take place between the two Koreas this year and will continue until today. [YONHAP]

An entourage of South Korean civic group and religious leaders visited Mount Kumgang in North Korea Tuesday to take part in a two-day New Year’s ceremony in the first non-governmental exchange between the two Koreas this year.

A total of 251 South Koreans crossed the border via a land route Tuesday morning to reach the resort at Mount Kumgang. The entourage, whose name loosely translates to a “New Year’s alliance to implement the inter-Korean joint declaration,” includes leaders of South Korea’s seven major religions and civic group members of diverse stripes, representing labor, women, youths and farmers.

While the event is purely a non-governmental affair, also taking part were several South Korean elected officials. This includes six lawmakers from the ruling Democratic Party (DP), the Party for Democracy and Peace and Rep. Hwang Young-cheul of the main opposition Liberty Korea Party (LKP) - a rare instance in which a member of the conservative party, which generally opposes the Moon Jae-in administration’s engagement of the North, joins such a ceremony.

Several business leaders tied to inter-Korean cooperation projects, such as the heads of business associations for the Kaesong Industrial Complex and Mount Kumgang resort - both linchpins of inter-Korean economic cooperation - were part of the entourage, as were members of the press covering the event and several support personnel.

The entourage was jointly led by Archbishop Kim Hee-joong, who represented the religious leaders; Ji Eun-hee, advisor to the Civil Peace Forum; Han Chung-mok, senior representative of the Korea Alliance for Progressive Movement; and Kim Hong-gul, chairman of the Korean Council for Reconciliation and Cooperation, who is the youngest son of former South Korean President Kim Dae-jung.

“We are pleased to have this opportunity to reforge our nation’s blood ties ahead of the centenary of the March 1st movement on behalf of our people,” said Archbishop Kim before the entourage left Seoul early Tuesday morning.

After a general greeting ceremony and a conference by the heads of both sides’ delegations, each of the South and North’s civic groups will meet with their counterparts to discuss ways to foster stronger ties. On the second day, they will watch the sunrise together near Mount Kumgang’s scenic coastline, followed by a visit to the Singye Temple, a prominent Buddhist temple.

Each South Korean organization taking part in the trip came with a list of possible joint projects to be pursued with the North. The South’s largest Buddhist sect, the Jogye Order, announced last month it would try to pursue the creation of a meditation program for tourists at the Singye Temple.

Seoul Education Superintendent Cho Hee-yeon revealed before the trip that he would suggest exchanges between the South and North’s students in the fields of arts, sports and academics.

While 10 journalists accompanied the entourage to cover the ceremony, their ability to report was severely hampered after they were prohibited by the United States government from bringing with them laptop computers and digital cameras due to international sanctions against North Korea.

Frustrated journalists lodged complaints to the Unification Ministry Tuesday on restrictions and a ministry official responded by saying the government would “work towards a positive conclusion” with regard to the issue.

Another government official in Seoul told the JoongAng Ilbo that while the United States had previously allowed the South’s journalists to bring equipment to the inter-Korean exchange last November, such an arrangement “did not proceed as planned” this time around.

Analysts said the tightening of regulations on the North could be part of Washington’s attempt to dial up pressure on Pyongyang before the two sides’ leaders meet for a second summit in Vietnam on Feb. 27.