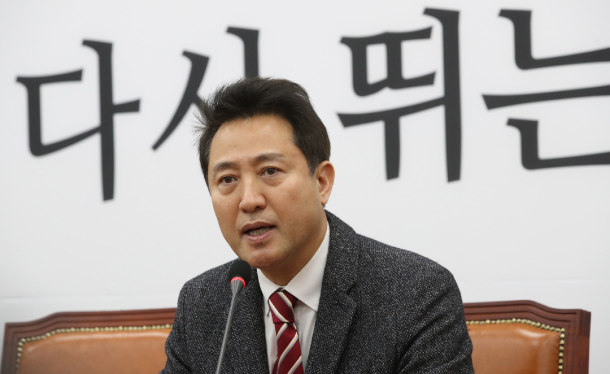 Former Seoul Mayor Oh Se-hoon, who boycotted the election of the main opposition Liberty Korea Party earlier, announces on Tuesday that he will rejoin the race for the chairmanship of the LKP. [YONHAP]

Former Seoul Mayor Oh Se-hoon said Tuesday he will rejoin the race for the chairmanship of the main opposition Liberty Korea Party (LKP).

“I will stop the party’s regression to the past and advance to the future,” Oh said in a media conference at the National Assembly, saying he will win the next general election for the conservative LKP and create the foundation to win the next presidency.

Oh said his decision to return to the race was not easy because the party rejected his demand to delay the election, which is scheduled for Feb. 27.

“I still do not agree with the unreasonable decisions of the party,” he said. “But I decided to run in order to stop the LKP from becoming a political party that only serves a certain region and ideology, not the entire people.”

The largest conservative party, which currently controls 113 of the 298 National Assembly seats, has been operating under the interim leadership of Kim Byung-joon since July last year. It decided last month to hold its national convention on Feb. 27.

After the United States announced President Donald Trump will hold his second summit with North Korean leader Kim Jong-un in Hanoi, Vietnam, on the same date, most candidates, including Oh, said they will boycott the event unless it is postponed.

The party’s election management committee, however, made clear Monday the event will take place as scheduled.

Oh, a lawyer who was elected to the National Assembly in 2000, won the Seoul mayoral election in 2006. He was re-elected to the post in 2010 but stepped down in 2011 after losing a referendum on a school lunch program due to the low voter turnout. Oh rejoined the LKP in November 2018 after leaving the leading conservative Saenuri party following the impeachment of then-President Park Geun-hye.

Tuesday marked the deadline for candidate registration, and Reps. Chung Woo-taik, Shim Jae-cheol, Joo Ho-young and Ahn Sang-soo each issued a statement that declared that they would not run. Hong Joon-pyo, former LKP chairman and presidential candidate, dropped out from the race Monday.

Former Prime Minister Hwang Kyo-ahn and Rep. Kim Jin-tae are the candidates who support the current scheduling of the leadership election. Hwang, who served as the minister of justice and later as prime minister for the Park Geun-hye administration, said Tuesday he welcomes Oh’s decision to run in the chairmanship election.

“It is desirable for the great leaders of our party to tell our vision to the party members and the people and move forward together,” he said. “I hope the national convention will become a festival that everyone participates in.”

Hwang has been leading opinion polls on the LKP leadership election. According to a Munhwa Ilbo poll of the public released on Feb. 1, Hwang was in first place with 18.7 percent. Oh came in second with 11 percent and Hong was in third with 7. 1 percent. A total of 48.4 percent of respondents said they support no candidate.